Fellowes full of hope as Marbaan goes for National Stakes 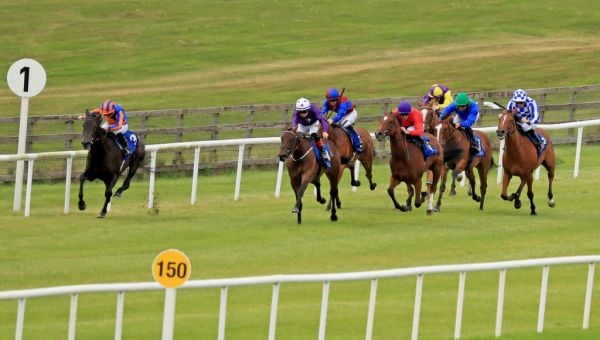 Charlie Fellowes has his best shot at Group One success to date as Marbaan prepares for the National Stakes at the Curragh on Sunday.

The son of Oasis Dream has continually shown his class all season, winning a novice at Nottingham by five lengths in June and then taking another at Salisbury exactly a month later.

At Goodwood in late July the colt stepped up to Group level for the first time in the Vintage Stakes and was victorious at 14-1, beating Chesham Stakes hero Holloway Boy and subsequent Prix Francois Boutin winner Mysterious Night in the process.

The National Stakes was mooted as a next step in the aftermath of the triumph, with the Champagne Stakes at Doncaster another possible for the son of Oasis Dream, together with the Prix Jean-Luc Lagardere.

Aidan O’Brien’s Little Big Bear, a runaway winner of the Phoenix Stakes, was later precluded from an intended run the National Stakes due to soreness, opening the race up and making the contest a more obvious step for Fellowes’ youngster.

Fellowes said: “He’s very well, he’s been such a straightforward horse to train.

“I gave him a couple of really easy weeks after Goodwood as he had had four runs and was miles ahead of the game.

“I was able to just back off him and luckily he’s got a constitution where you’re able to do that, he doesn’t get too fresh too easily and he put on a nice amount of weight.

“We’ve picked him up with the National Stakes in mind, he’s done everything we could have wanted, his work has been good and he looks a picture so we’re really looking forward to Sunday.”

“It looks like it might be very different ground which adds a new dimension to the race, but he’s definitely the one to beat and reports are that they hold him in pretty high regard.

“I’d like to think there’s more to come from my fella, we’ve got to take another step forward but we’ve got some pretty decent form in the book and he’s improving all the time.”

If Marbaan were to land the National Stakes he would provide Fellowes with the first Group One victory of his career, with his closest attempts so far provided by Prince Of Arran’s narrow defeats in the Melbourne Cup.

“If you include the Melbourne Cup, which some people don’t as it is a handicap, we’ve come close a few times,” he said.

“In England, in fact in Britain, we haven’t had that many Group One runners so this would definitely be the best chance we’ve ever had going into a Group One.”

Though Little Big Bear will not run at the Curragh, O’Brien is still well-represented as he will saddle two of the field of six.

The aforementioned Aesop’s Fables heads the market, with the runner-up from the same race also representing the stable in the shape of Frankel colt Hans Andersen.

Ryan Moore was in the saddle for both of the formers two victories and spoke highly of the son of No Nay Never, saying: “Aesop’s Fables is one I’ve always liked.

“Unfortunately he had a minor setback which kept him off the track until the Futurity. He was really quick the last furlong there having been a little bit green at halfway.

“Once I asked him he dug in and won very well, I was impressed by him. He’s a really well made, strong colt and if you saw him in the paddock beforehand he really stood out.”

The O’Brien family are responsible for two further runners, with elder son Joseph saddling Al Riffa, second behind Hans Andersen on his debut, and younger son Donnacha running Proud And Regal, third in the Futurity and a Group Three winner beforehand in the Tyros Stakes.

Johnny Murtagh’s Shartash, an Aga Khan-owned colt who was the winner of the Group Two Railway Stakes and third in the Phoenix, completes the line-up.