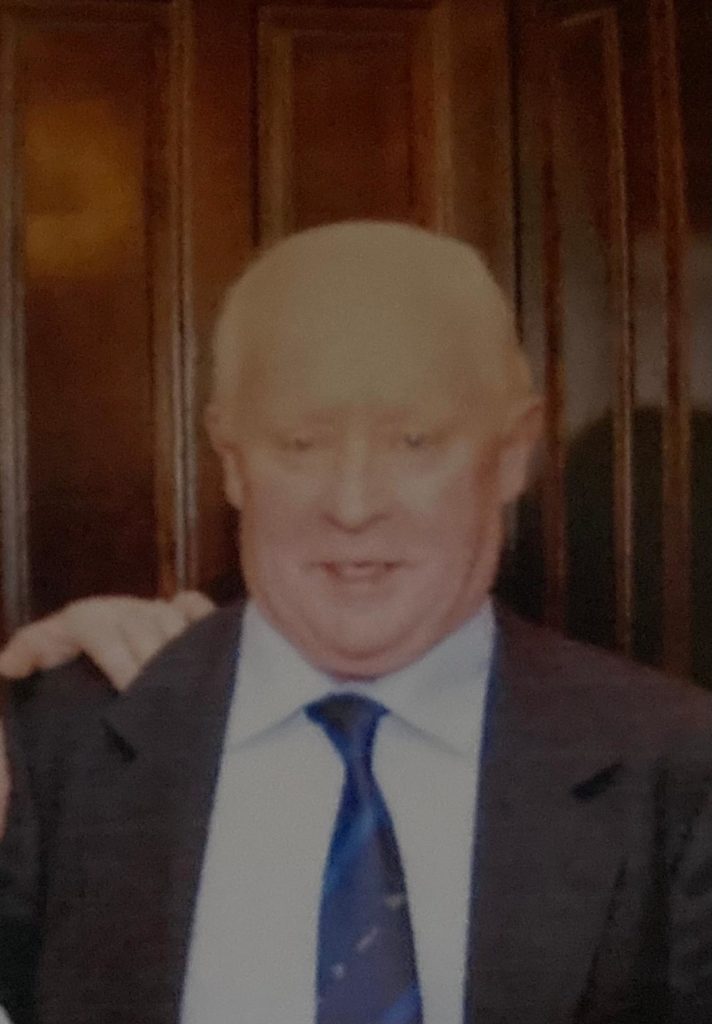 Mick was born on 18 January 1943, son of the late Patrick and Annie (née Murphy) and one of a family of eight – four boys and four girls. His father was the local postman.

After attending Old Leighlin National School, Mick left the school books behind at an early age to go working with the local Walshe’s quarry in Old Leighlin. He was to go on to become a lorry driver with the quarry; indeed, driving was to be his livelihood from then on.

After some years with Walshe’s, he gained employment with the South Eastern Health Board as an ambulance driver, based at the District Hospital in Carlow. Mick provided 16 years of loyal and significant service in that capacity, up to the age of 65.

But Mick Kelly’s driving days were by no means over. He then went driving for McEvoy Coaches in Bagenalstown for a number of years to finish out his working career.

An avid GAA follower, Mick played in the blue and white of Old Leighlin and won a medal with the club in the 1950s. He supported the club down the years, glorying in the four Carlow senior football championships won by the men from close to the Kilkenny border.

He was an avid supporter of Wexford hurling and football teams, his family hailing from the Model County. Mick supported the Red Devils of Manchester United in cross-channel soccer.

It was at the 2015 Carlow senior football final involving Old Leighlin that Mick suffered a heart attack. He was treated in St James’s Hospital and made a full recovery. It was only in the last six to seven months of his life that Mick’s health went into serious decline, after he had suffered a fall.

He was a patient in St Luke’s Hospital, Kilkenny for a month before spending the final four weeks of his life being cared for at home –  in keeping with his own and his family’s wishes.

Mick was married to the former Brigid Watchorn from Craanlusky. They wed on Easter Monday, 27 March, 1967 in St Lazerian’s Church, Leighlinbridge. Mick and Brigid had enjoyed 55 years of married life, rearing a family of three children.

As a couple they enjoyed holidaying in various tourist spots in Ireland, most notably Killarney, while also enjoying vacations in Galway, Clare and Donegal.

Mick enjoyed a social drink, the Wooden Tavern in Tomard being his local before the closure of the pub a few years back. He also enjoyed coming into Carlow on a Saturday to have a flutter on the horses with Paddy Power bookmakers.

Mick was a devoted family man, the welfare of Brigid, his children, grandchildren and siblings being his greatest concern.

He reposed at home in Craanlusky on Tuesday and Wednesday, with prayers being led in the Kelly household by Deacon Patrick Roche.

His remains were removed to St Fintan’s Church, Ballinabranna, Mick’s local church, on Thursday morning, where his funeral Mass was celebrated by Fr Tom Lalor, CC, Tinryland and former parish priest in Leighlinbridge, a friend of the Kelly family for some 20 years.

Guards of honour were provided by members of Old Leighlin GFC and former colleagues in the ambulance service.

Readings at Mass were by Noel Kane (nephew) and Sharon Maher (daughter), while Prayers of the Faithful were recited by Mick’s grandchildren. The singing of hymns at Mass was by the Ballinabranna choir.

There was no bringing forward of significant aspects of Mick’s life and no eulogy – he was old school, preferring to keep things low key.

Following Mass, Mick was laid to rest in the adjoining cemetery, with Deacon Roche reciting the final prayers at the graveside.