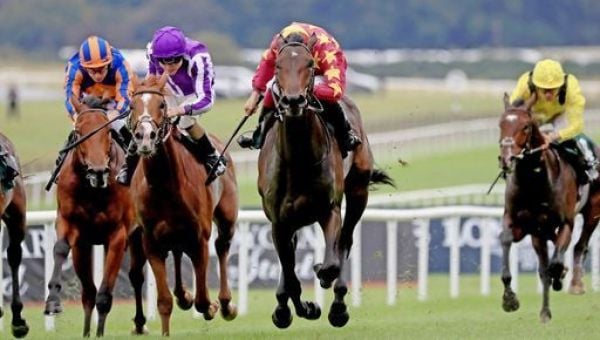 Al Riffa justified the decision to supplement for the Goffs Vincent O’Brien National Stakes as he landed the Group One prize at the Curragh.

Winner of a maiden at this track on his second start last month, Joseph O’Brien’s charge was added to the field at a cost of €40,000 earlier in the weekend and he repaid that faith in style.

Hans Andersen led his fellow Aidan O’Brien-trained inmate and 8-13 favourite Aesop’s Fables through the early stages, but they were lining up in behind to challenge in the final furlong.

It was 9-1 shot Al Riffa who produced the decisive finish, powering down the middle of the course to give his rider Dylan Browne McMonagle a memorable first top-level victory. Proud And Regal was beaten a length and a quarter in second, with Shartash in third and Aesop’s Fables dropping away to come home fourth.

“It was a special performance. He won his maiden well and the owners were keen to supplement him for this,” said O’Brien.

“It was a very impressive performance to come from the back of the field like that.

“He was a big shell of a horse as a yearling and I thought he’d make a lovely three-year-old, I didn’t for a minute think he’d make the two-year-old that he has made.

“He was a big, good moving horse and a horse that was going to mature well. His family is all stamina and for him to be doing what he’s doing at this stage is very positive for the future.

“We always thought he was a middle-distance horse, and he’s closely related to an Ascot Gold Cup winner so that’s real stamina – but he’s not slow and didn’t look in any way slow today.

“I’d imagine he’s a Guineas horse for sure and we’ll take it from there. He’s a classy horse and very exciting.

“The plan coming here was to go on to the race on Arc day (Prix Jean-Luc Lagardere), but we’ll see how he comes out of it today and discuss it with the owners.

“We thought if we ran in the first three it would be a really good run and that would set him up lovely for the race in France.

“That’s what we were hoping and to see him come on the bridle down to the two today was quite special.”

On the 19-year-old McMonagle, he added: “Dylan has been riding very well for the last number of years.

“He won on this horse and he was entitled to keep the ride on him. I thought he gave him a marvellous, confident ride and he has a big future.”