Day in the life: FinalBend entrepreneur (21) on juggling the boardroom and classroom 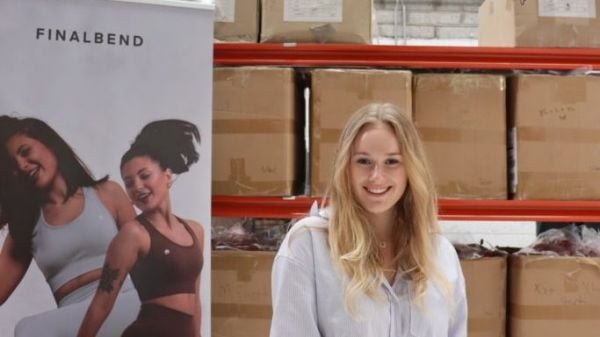 In athletics, the approach of ‘slow and steady’ has rarely been known to actually win races, but having hung up her running shoes, Emma Coffey has found that it most certainly applies in the world of business.

Although the 21-year-old admits she “got into starting a business by accident”, the success of her sportswear brand FinalBend has not come by chance.

Wanting to stay involved in the world of athletics when she stopped competing, Coffey says she planned to sell her wares at the competitions she once attended as an athlete.

While it took off “marginally” from there, she happily admits that at that point – when she was in just fifth year in secondary school – it was more of a project than a business.

Now a final year student in University College Cork, unsurprisingly studying Commerce, she credits her business’s small beginnings with giving her the opportunity to learn vital lessons with less risk involved, sparing her from making much more costly mistakes further down the line.

“I made a huge mistake early on with a supplier, who basically ended up scamming me, but I had only ordered five things,” Emma recalls, adding that while five pieces seems like nothing considering FinalBend now requires a warehouse to hold its stock, “it was a big deal at the time”.

Coffey stresses that it’s all relative – and while mistakes feel monumental at the time, you learn from them.

Figures published by the Central Statistics Office (CSO) in July showed women occupied just 13.4 per cent of chief executive roles across 700 enterprises surveyed in the State in 2021.

The Gender Balance in Business Survey also revealed that 14 per cent of chairperson roles and 29.7 per cent of senior executive positions were held by women, while woman made up only 21.8 per cent of the people on the boards of those companies.

“When you’re given that opportunity to be that outlier, it’s up to you to be heard.”

While she adds that she has “never felt that being a woman in business was working against me”, she admits she does take it as a challenge to ensure she has her say at the top table.

Judging by Emma’s ‘typical’ day, this love of a challenge translates to the delicate balancing act of being director of a successful business and keeping on top of her college work.

“I don’t do chill in college at all,” she jokes, running through her day which starts bright and early with admin for FinalBend at 8am.

Come 10am, it’s time for some collaborative work with FinalBend’s marketing manager and head of e-commerce Clodagh, which could see them working on collections, or discussing new products.

The middle of the day is dedicated to college work, before it’s back to FinalBend to see off the next day’s orders and start into the all-important social media work.

And this is where Emma and her team, and indeed their generation, come into their own – harnessing the power of the likes of Instagram and TikTok to build a brand.

With over 25,000 followers on Instagram and over 44,000 on TikTok, FinalBend’s content is building a customer base and brand recognition.

When people ask if they should start a business I’m like ‘yeah, start it right now, start it today’

Posing a simple question: “Have you ever walked into a shop that has no shopkeeper standing there?”, Emma explains that social media content – whether it be a story on Instagram, or a short video on TikTok – helps social media users, and potential customers, put a face to the brand and form a connection with the business.

After FinalBend is taken care of for the day, Emma retreats to the relative calm of the library where she watches recordings of her lectures from that day.

Acknowledging she’s likely one of very few who would admit to this, she says she was “really fortunate” that the Covid-19 pandemic put education online, allowing her to focus on FinalBend during office hours before shifting her attention to college work in the evening.

Although Emma’s jam-packed day extends well beyond the 9-5, something most entrepreneurs can sympathise with, she would still advise anyone who is pondering the leap into starting an enterprise to give it a go.

“When people ask if they should start a business I’m like ‘yeah, start it right now, start it today’.

“So long as you’re enjoying it, it’s all going to work out.”