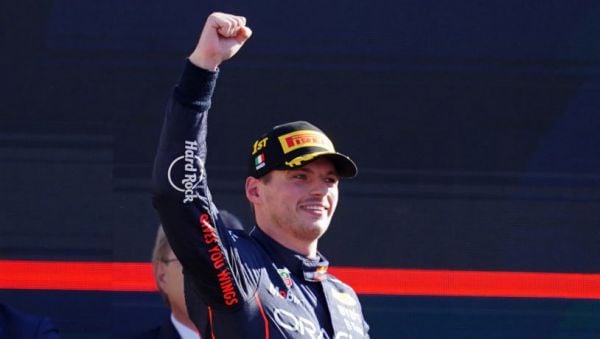 Formula One’s governing FIA defended its decision not to red flag the climax of Sunday’s Italian Grand Prix – after Max Verstappen’s victory behind the safety car was booed by furious Ferrari fans.

Verstappen could now clinch his second world championship at the next round in Singapore on October 3rd following his fifth victory in succession. His title lead stands at 115 points with only 164 available.

Charles Leclerc provided some opposition to Verstappen, but an aggressive two-stop strategy by Ferrari did not pay off.

We nailed it 👌🇮🇹

We had an amazing start and I was able to quickly get in my rhythm. The car was absolutely flying and really enjoyable to drive all weekend, great work once again team! pic.twitter.com/vx7oTVKRFH

On lap 47 of 53, Leclerc trailed Verstappen by 16 seconds. However, he looked set to be handed another shot at victory when Daniel Ricciardo broke down between the two Lesmos, and the safety car was deployed.

Huge roars rippled around the Monza Autodromo. But the tifosi’s cheers turned to jeers when Ricciardo’s McLaren could not be removed from danger in time, and normal racing conditions did not resume.

Leclerc finished second ahead of George Russell, following another fine performance from the British driver in his Mercedes. Lewis Hamilton, thrown down the grid for exceeding his allocation of engine parts, drove well from 19th to fifth.

Verstappen faced a chorus of boos when he arrived on the podium as fans gave the thumbs down following the result.

Red Bull team principal Christian Horner said: “We had the faster car, and we would have liked to have won the race on the track, not behind the safety car.

“We share the disappointment of all the fans because it took away a grandstand finish. They were the biggest losers today.”

There was also a suggestion that the safety car picking up Russell – rather than leader Verstappen when it entered the track – also scuppered precious time.

It was an accusation the FIA denied with Ricciardo’s car only removed at the beginning of the penultimate lap. Two laps must then be completed behind the safety car before the race can re-start.

An FIA spokesperson said: “While every effort was made to recover Ricciardo’s car quickly and resume racing, the situation developed, and marshals were unable to put the car into neutral and push it into the escape road.

“As the safety of the recovery operation is our only priority, and the incident was not significant enough to require a red flag.

“The race ended under a safety car following the procedures agreed between the FIA and all competitors. The timing of the safety car period within a race has no bearing on this procedure.”

Michael Masi was sacked as F1 race director after he fudged the rules to allow Verstappen the chance to beat Hamilton to the title in a one-lap shootout at last season’s contentious decider in Abu Dhabi.

Wolff said: “It is very clear. There are rules, they are written down, and from my perspective, whether I am traumatised by Abu Dhabi or not, these rules today have been followed to the letter.

“There was a car out on track, and there were marshals and a crane out there and that is why they didn’t let anyone overtake. There was not enough time to re-start the race.

“You can only red flag the race if someone is in the wall or the track is blocked. If one is not happy with the regulations and you want to have a big-bang show and two laps of racing and mayhem, then I am up for that, but we need to change the regulations.”

FIA president Mohammed ben Sulayem will meet with team bosses in Monza on Monday. The controversial safety car finish is likely to be near the top of the agenda.

Verstappen will take the crown in Singapore with five rounds still remaining if he outscores Leclerc by 22 points, team-mate Sergio Perez by 13 points, and Russell by six points.