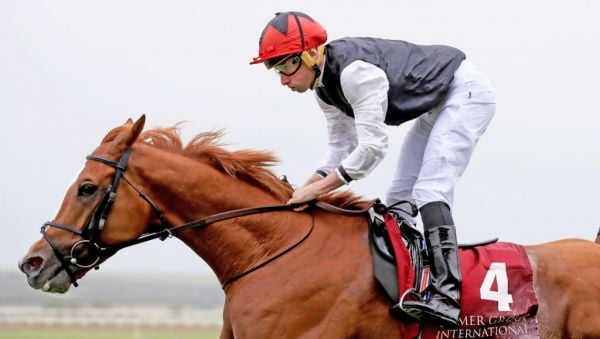 Kyprios underlined his status as king of the staying division as he extended his unbeaten record to five in the Comer Group International Irish St Leger at the Curragh.

Winner of the Gold Cup at Royal Ascot and the Goodwood Cup on his last two starts, Aidan O’Brien’s charge was odds-on to make it a Group One hat-trick on day two of Irish Champions Weekend.

Kyprios had to be pushed along early to get into Ryan Moore’s preferred position on the heels of the leaders, but his early work paid dividends as Kyprios was able to strike for home at the top of the straight as pace-setter Jason The Militant dropped away.

It looked as though Kyprios would gallop clear, but William Haggas’ British raider Hamish emerged from the pack to make a battle of it, closing to within half a length of the winner, who was just too strong in coming home three-quarters to the good.

Search For A Song, a previous dual winner of the race and a second string for Kyprios’ owners Moyglare Stud, was a seven-length third.

O’Brien said: “He’s very tough. He’s very relaxed and is always only in the gear that you want. Ryan gave him a great ride.

“He’s a great horse to have. He’s obviously a horse that gets a trip, but he has a lot of class. He’s very relaxed which is a massive help and helps him get the trip.

“He’s very brave, very clear winded, a good mover and a great mind. It’s just a pleasure to have him.

“He’s very easy to deal with and it leaves him with a lot of options. He was probably extra lazy today and maybe it was the soft ground that made him a little bit more laboured.

“He could go back to a mile and a half, but obviously we would love to have him around for the Gold Cup for the coming years because he is a unique horse.

“It was great that Eva (Maria Bucher Haefner, of Moyglare) was here to see him today.”

Coral make Kyprios the 6-4 favourite for the Qipco British Champions Long Distance Cup at Ascot next month – but a Prix de l’Arc de Triomphe bid is not totally ruled out.

When asked if he could be tempted to run at ParisLongchamp, O’Brien added: “We’ll see what happens, what everyone thinks, and see what way the ground is going to be.

“He is only a four-year-old so for a stayer he is very young to have done what he has done already.

“We saw today that he just does the minimum, so it’s very hard to know how much is in there really.

“He’s out a great mare from a great family and obviously he’s by Galileo. He’s very unique really.”