THE knockout stages for the Michael Lyng Motors Senior Football Championship are laid out after the weekend’s results and it’s shaping up to be a very interesting Championship.

Tinryland and Palatine can put their feet up next weekend after they topped their respective groups and booked their places in the semi-finals and they will now await the outcome of two mouthwatering quarter-finals next weekend to see who they face in the last four.

Palatine had to come from behind on Saturday to earn a 1-14 to 3-8 draw with Old Leighlin, while Tinryland held on to beat Bagenalstown Gaels by 0-11 to 1-5.

Éire Óg finally landed their first win of the Championship when they comprehensively beat Ballinabranna by 3-25 to 1-5.

That result was only good enough to secure second place in their group and Turlough O’Brien’s team will now play Rathvilly in the quarter-final in a repeat of the last two county finals. The two clubs have been the standard bearers for the rest of the county in the last couple of years but now, one of them will be out of the Championship before the semi-finals. Rathvilly only finished third in their group after Chris Nolan’s two goals helped inflict their second defeat of the Championship, with Mount Leinster Rangers winning out by 3-9 to 1-7. 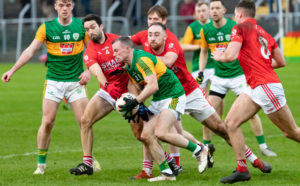 Rathvilly and Éire Óg have had a couple of great tussles in the last two SFC county finals but one of them will exit this year’s competition at the quarter-final stage after they were paired together
Photo: michaelorourkephotography.ie

Rangers will now play Bagenalstown in the quarter-finals. The two clubs met in the hurling championship semi-finals earlier this year when Bagenalstown landed a shock win and with many of the same players involved for both clubs Rangers will be eyeing something of a revenge.

The quarter-finals will take place next weekend. The two group winners, Palatine and Tinryland, will be kept away from each in the semi-final draw that will take place after those games.

In the Talbot Hotel Intermediate Football Championship, Fenagh and Kilbride are through to the semi-finals, while in the quarter-finals Grange will play Naomh Eoin and St Patrick’s will take on Kildavin/Clonegal.

In the Junior ‘A’ Championship – Clonmore and Ballon look miles ahead of the rest and both topped their groups, while racking up huge scoring differences, to book their semi-final places. In the quarter-finals, Leighlinbridge meet Old Leighlin while Palatine face Tinryland.