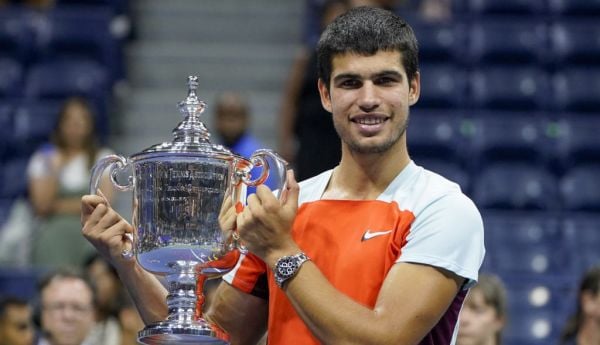 The combined age of men’s and women’s world number ones Carlos Alcaraz and Iga Swiatek is the fourth-youngest in rankings history.

The new US Open champions – aged 19 and 21 respectively – are the youngest pairing to top the rankings since Marcelo Rios (22) and Martina Hingis (17) in August 1998.

Alcaraz became the youngest world number one in the history of men’s tennis by lifting his maiden Grand Slam title on Sunday, while Swiatek cemented her status as the world’s best with her second major of the year and third overall on Saturday.

This is the first time since January 2004 that the players at the top of the men’s and women’s rankings are both aged under 22.

Changing of the guard

The combined age of the men’s and women’s number ones has hovered around 60 for much of the past decade, because of the dominance of Novak Djokovic, Rafael Nadal, Roger Federer and Serena Williams.

With Williams retiring at the US Open, Nadal losing in the fourth round, and Djokovic and Federer absent, victories for the youthful Alcaraz and Swiatek point to a bright future ahead.

While Williams’ retirement captured much of the early attention, the interest was sustained through the second week by a series of enthralling, high-quality encounters between the game’s next generation of stars.

Congratulations @carlosalcaraz and to you @CasperRuud98 as well! What a ride! 🤗

Alcaraz defeated 21-year-old Jannik Sinner in the quarter-finals, 24-year-old Frances Tiafoe in the semis and 23-year-old Casper Ruud in the final.

His match against Sinner was among the finest in US Open history, lasting five hours and 15 minutes and finishing just before 3am local time.

On the path to greatness

By lifting the US Open title on Sunday, Alcaraz became the youngest Grand Slam winner since Nadal at the French Open in 2005.

The Spanish right-hander is ahead of his compatriot’s rivals Djokovic and Federer at the same age.

Djokovic won his first major at the 2008 Australian Open when he was 20, while Federer did so at Wimbledon 2003 aged 21.

Swiatek is further along in her development – the Pole is the first female player to win three Grand Slam titles before her 22nd birthday since Maria Sharapova.

Williams had four major trophies at the same age and six before turning 22.