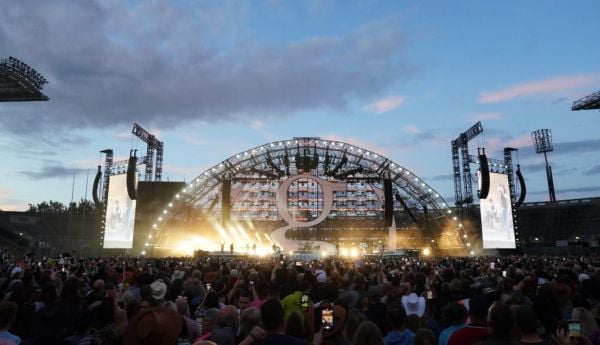 A “designated driver” for a group of Garth Brooks fans at Saturday’s sell-out gig in Croke Park has been accused of breaking a garda’s nose during the country music star’s concert.

Gary Doyle (27), of Kinallen Road, Ballyward, Castlewellan, Newry, Co Down, appeared before Judge Bryan Smyth at Dublin District Court on Monday and was released on €1,000 bail pending directions from the Director of Public Prosecutions (DPP).

Gardaí charged him with assault causing harm to the officer at Croke Park on September 10th, but the court heard he denies the allegation.

Garda Sergeant Elaine Murtagh told Judge Bryan Smyth she arrested the man at 10.05pm on Saturday at the stadium in Dublin.

He was taken to Store Street Garda station in the city centre.

The court heard his reply to the charge after caution was: “I didn’t do it”. He was refused station bail and was conveyed in garda custody to the court on Monday.

There was no objection to court bail, but the sergeant sought a cash lodgement because the accused lived outside the jurisdiction.

His solicitor Michael Kelleher told the court his client was in a position to lodge €1,000.

Judge Smyth noted that he did not have a bench warrant history and granted bail.

He also asked what injuries were involved in the case. “A broken nose,” Sgt Murtagh replied, adding that a file is to be prepared for the DPP.

The court heard the injured garda attended hospital and will return on Thursday for a decision regarding surgery.

At that point, the defence solicitor told the court Mr Doyle “at all times maintained his innocence”.

Mr Kelleher said his client was “a designated driver” for a group who came down to Dublin for the concert and “was sober at all times”.

The solicitor asked for CCTV evidence to be furnished and added that the video footage would show Mr Doyle was “not the assailant”.

Sergeant Murtagh said gardaí would endeavour to provide the evidence to Mr Kelleher, who wanted disclosure “as quick as possible”.

Judge Smyth released Mr Doyle on €1,000 bail on the condition he gave gardai his mobile phone number, remained contactable at all times, and notified them of any address change.

He ordered him to appear on October 10th for the DPP directions and warned him to attend court on all future dates in person.