IT was a weekend to remember for two of Carlow’s best sportswomen as Kylie Murphy and Dannah O’Brien kept up their brilliant form in their respective sports. 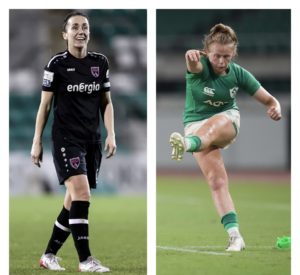 Kylie Murphy scored her 100th National League goal as Wexford Youths beat Cork City 5-1 to move to the top of the table with five games to go. The win, coupled with Shelbourne’s defeat to Peamount, sets up a thrilling end to the season. Wexford are also in the FAI Cup semi-final and Murphy will be a key player as they chase a league and cup double in the coming weeks.

Over the weekend, Dannah O’Brien continued the brilliant form that saw her recently earn her first senior international caps. The former Tullow RFC player signed for AIL team Old Belvedere and made an immediate impression when she kicked an important penalty on her debut after being introduced from the bench in a 14-5 win over UL Bohemians.

Both women feature prominently in this week’s edition of The Nationalist, on shelves tomorrow morning, with feature interviews with both detailing their recent exploits.