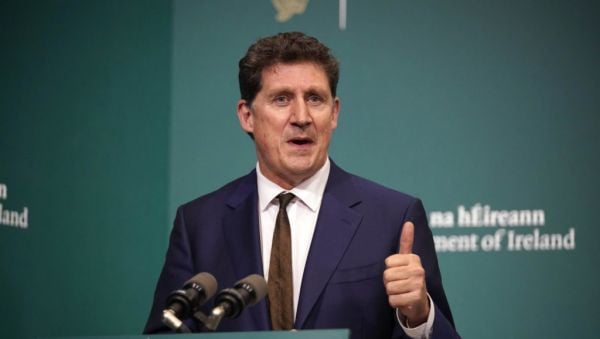 The State has pledged to increase its offshore wind power following an agreement with other EU energy ministers from coastal states.

In a joint declaration of the North Seas Energy Cooperation group, Minister for the Environment Eamon Ryan confirmed that they will aim to install offshore wind turbines to generate 73 gigawatts by 2030 and at least 260GW of offshore wind energy by 2050.

It aims to make offshore wind energy one of the major sources of power within Europe.

“No one has ever weaponized access to the sun or the wind. We need to move off fossil fuels as fast as possible, for our security, for our society,and for our economy”

Kicking off the session ‘establishing an efficient and residential global supply chain for offshore renewables’ pic.twitter.com/WStObJfGUV

The agreement reached represents more than 85 per cent of the EU-wide target of 300GW for 2050.

Mr Ryan described it as a “very significant project” for the future of our energies.

“The North Seas Energy Cooperation is critical to the development of our offshore wind resources.

“What we did, nine ministers coming together, is making sure that actually we do this in a collective organised properly structured way.

“It’s central to meeting our climate targets. It’s a huge industrial development opportunity for each of our countries and for Europe and it’s critical for meeting our energy security.

“This project is the response to the war on energy that has been started by the Russian government. It’s our opportunity to switch to our own resources, to protect our people having a secure supply, lower cost, cleaner power.

“The declaration today is a declaration of real intent. We are going offshore, we’re going on scale and speed to develop our own power, a new industrial revolution.

“It’s also the peace project of our time. It switches away from gas, at this time when it’s been used as a weapon of war. It switches to power that we can rely on that we have in Ireland and particularly at scale.”

Mr Ryan added: “If we deliver some of those 300 gigawatts, it’s roughly 10 per cent of European energy supply and that’s not insignificant.

“When you start matching that with solar from the south, hydro from the Alps and from Scandinavia, we still match that with energy efficiency, you start to reduce our dependence on imported fossil fuels. It’s one of the big scale renewable projects which we have to hand.”

The Dublin declaration is a signal to all that europe will deliver 260GW of offshore wind by 2050.

Giving our industries, our regulatory systems and our environmental groups the clarity and confidence to help us achieve energy security with clean low cost energy. #offshore pic.twitter.com/ng9AMvqAH6

Rob Jetten, the energy minister for the Netherlands, said it was a “peace project” of our time.

“The North Sea is actually the region to become the energy power hub for the whole European Union.

“Some 85 per cent of our wind ambition from the EU can be realised here in this region. The work of the Irish presidency has been crucial to take important steps for the upcoming years.

“It’s crucial that we work together with the UK if we want to be as much as energy independent as we can be.”