Borris VS start Leinster league with defeat in Wexford

BORRIS Vocational School started the Leinster Senior Hurling League with a defeat in the picturesque surroundings of Maudlinstown GAA club but there were enough positive signs to have pleased the management team on their way back home.

The opening 20 minutes of the game was closely contested with Borris landing some eye catching scores through Brad Bolger, Cian Quirke and Jack Foley. Wexford dominated the last 10 minutes of the half and led 1-14 to 0-7 at the break but Borris actually scored their best point during that period. Goalkeeper Eoin Coleman sent a long ball into the Wexford near the left sideline that Padraig Kavanagh skilfully managed to keep the ball in play. He then set up Quirke who landed a cracking score.

As well as being involved in that score, goalkeeper Coleman was also in top form when called up for his goalkeeping duties and he made a couple of outstanding saves in the first half.

Quirke pulled a goal back early in the second half when his mishit shot deceived the home goalkeeper and they almost got a second a couple of minutes later when Kavanagh hit the upright after a goalmouth scramble. 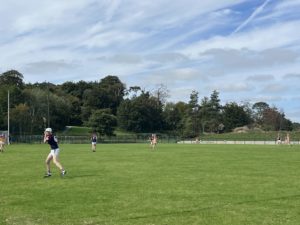 That was the last chance that Borris had of getting anything from the game and the home side saw it out by adding a second goal in the closing stages.

The defeat makes it difficult for Borris to qualify for the knockout stages of the league with only the top side of the three team group going through. However, there is still a real importance to their next game against Bunclody in a couple of weeks because they are also in Borris’ group for the Leinster Senior ‘B’ Championship which starts in mid-November.

Emotionally charged occasion for Kane as he lifts Nationalist Cup