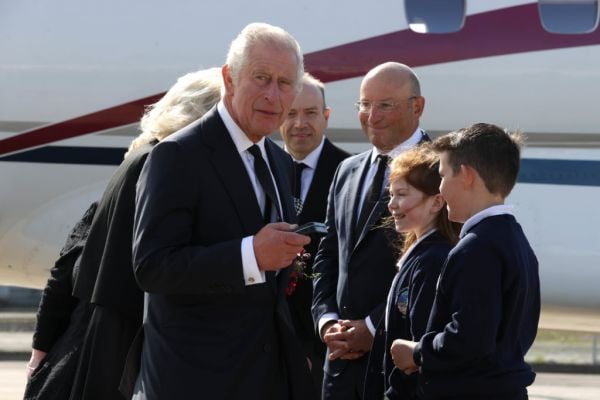 Britain’s King Charles III and the Queen Consort have arrived in Belfast – the next leg of their tour of the UK nations – where they will receive a message of condolence from the people of Northern Ireland.

Charles and Camilla left Edinburgh for Northern Ireland after the new British monarch and his siblings staged a vigil around their mother’s coffin on Monday evening at St Giles’ Cathedral.

The couple’s jet touched down at George Best Belfast City Airport, where Britain’s new Northern Ireland secretary Chris Heaton-Harris was waiting to greet the king and his wife.

Royal visits usually prompt gifts and, despite the solemnity of the occasion, schoolboy Lucas, drawn from a local cross-community primary school, presented the king with a tin featuring an image of the famous Giant’s Causeway.

The king looked pleased and tapped the present from Art on a Tin, a business set up by couple Bill and Caroline Skillen to promote local artists, and filled with truffles made by the Chocolate Manor from the Northern Ireland seaside village of Castlerock.

Camilla received a posy of flowers, from schoolgirl Ella, with the blooms taken from Hillsborough Castle.

After touching down in Belfast, Charles and Camilla travelled to Hillsborough Castle in Co Down, the royal residence in Northern Ireland, for several engagements.

The king will hold a private audience with the Northern Ireland secretary as well as meeting representatives of political parties in the North.

The couple will then receive a message of condolence on behalf of the people of Northern Ireland from the speaker of the Stormont Assembly Alex Maskey.

They will then go to a reception at the castle, hosted by Mr Heaton-Harris, which some members of the public will also attend.

Charles and Camilla will then travel to St Anne’s Cathedral in Belfast where they will attend a service of reflection for the life of the queen.

The king will also meet leaders from all the major faiths in Northern Ireland.

Before leaving, Charles and Camilla will undertake a walkabout at Writers’ Square near St Anne’s Cathedral.

Hundreds of people are gathering in the village of Hillsborough ahead of their arrival. Large numbers are already lining the village’s Main Street near Hillsborough Castle.

Spectators are being driven into the village on shuttle buses amid a massive security operation.

Michael Poots, principal of Downshire Primary School in Hillsborough, said the visit of the king and queen consort to the village will make it a “wonderful day”.

A number of students from the school will meet Charles and Camilla.

“It is great that as a school we can be part of it. We are so close to (Hillsborough) Castle and the children are greatly looking forward to it,” Mr Poots said.

“You can hear the excitement. They are looking forward to meeting the King and, of course, the Queen Consort today. We are all going into the village and hopefully we will get a glimpse of them.”