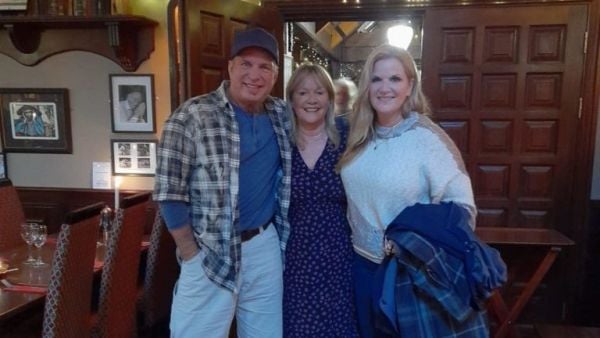 Country music mega star Garth Brooks and his equally famous singer wife Trisha Yearwood paid a surprise visit to Co Wicklow on Sunday, having to stop off for a spot of lunch.

The 60-year-old and his wife are taking a four-day break ahead of his final two dates of his five-night run of concerts at Croke Park.

The father of three has said he and his wife would be celebrating her 58th birthday in Ireland, adding that they would be treating their time here as a second honeymoon.

A spokesperson for the restaurant said: “We sure had friends in high places today when Garth Brooks and Trisha Yearwood dropped into the Wicklow Heather for lunch today.

“They are such a lovely couple and we were so happy to show them our antique book collection. (We) can’t wait for Croke Park on Friday now.”

Brooks’ has sold over 400,000 tickets for his five shows at the Dublin venue, with just a handful still available for the remaining Saturday gig.

The couple, who spend a lot of their time in Nashville, Tennessee, are known for their charity work with Habitat for Humanity, alongside former US president Jimmy Carter and his wife Rosalynn.

It is understood that Brooks and Yearwood are staying in a privately rented house in Co Kerry and are travelling to and from the Dublin gigs each night by helicopter.