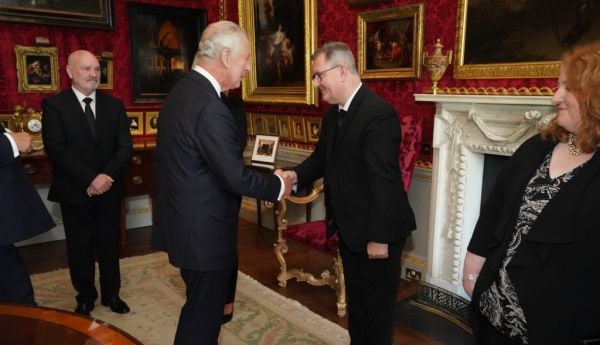 Britain’s King Charles has questioned the leader of the DUP about the party’s position on the Northern Ireland Protocol during a visit to Hillsborough Castle.

Charles had a lengthy conversation with Jeffrey Donaldson about the European Union and the ongoing issues surrounding the protocol at the royal residence in Northern Ireland.

Mr Donaldson told the new British monarch that there are positive sounds coming from the EU side and that he was hopeful matters would “progress”.

The king spoke to Mr Donaldson and Sinn Féin vice president Michelle O’Neill about the Northern Ireland Assembly and its current impasse.

The Northern Ireland Protocol is designed to prevent a hard border on the island of Ireland after Brexit, however unionists are opposed to it because it has introduced new trade barriers in the Irish Sea.

It has sparked a powersharing crisis at Stormont, with the DUP withdrawing from the Executive in protest.

The king expressed a keen interest on the topic during his talks with the North’s political leaders.

Before the king’s arrival, the atmosphere among the political leaders was relaxed with Mr Donaldson and Ulster Unionist leader Doug Beattie sharing a joke.

Meanwhile, Ms O’Neill told the king she was sorry for his deep loss when she met him at Hillsborough.

She told him: “Her life and legacy will be fondly remembered by those of a British identity here who with great pride and devotion held her very dear.

“She led by example in advancing peace and reconciliation and the building of relationships with those of us who are Irish, and who share a different political allegiance and aspirations to herself and her government.

“I hope this continues now that you are king and the British-Irish relationship strengthens and evolves as one era ends, and a new one begins in these changing times.”

The king expressed his gratitude over the comments about his mother.

Among those attending the reception at Hillsborough Castle was a broad mix of sport, political and business people, including Alliance leader Naomi Long and the SDLP’s Matthew O’Toole.

Mary Peters, the Northern Ireland pentathlete who won gold at the 1972 Munich Olympic Games, was among the audience.

The king also took some time to meet the soldiers who performed a 21-gun salute in the queen’s honour.

The speaker of the Stormont Assembly, Alex Maskey, described how the queen had been part of efforts to build peace in Ireland.

In a message of condolence on behalf of the people of Northern Ireland, he said the queen had not been “a distant observer” in the transformation and progress of relationships among the people of the country.

He said the monarch had “demonstrated how individual acts of positive leadership can help break down barriers and encourage reconciliation”.

Mr Maskey added: “She showed that a small and insignificant gesture  – a visit, a handshake, crossing the street or speaking a few words of Irish – can make a huge difference in changing attitudes and building relationships.”

The queen’s recognition of both British and Irish traditions, as well as the wider diversity of the community was “exceptionally significant”.

He added: “In all of this she personally underlined that one tradition is not diminished by reaching out to show respect to another.”

In reply to the message of condolence on behalf of the people of Northern Ireland, Charles said:  “On behalf of all my family, I can only offer the most heartfelt thanks for your condolences.

“I am here today at a time of great personal sorrow as we mark the death of my beloved mother, after a life most faithfully dedicated to the duty to which she had been called.

“It is fitting that we should meet at Hillsborough, which my mother knew so well, and in whose beautiful rose garden she always took such pleasure.

“In the years since she began her long life of public service, my mother saw Northern Ireland pass through momentous and historic changes.

“Through all those years, she never ceased to pray for the best of times for this place and for its people, whose stories she knew, whose sorrows our family had felt, and for whom she had a great affection and regard.

“My mother felt deeply, I know, the significance of the role she herself played in bringing together those whom history had separated, and in extending a hand to make possible the healing of long-held hurts.

“At the very beginning of her life of service, The Queen made a pledge to dedicate herself to her country and her people and to maintain the principles of constitutional government.

“This promise she kept with steadfast faith.  Now, with that shining example before me, and with God’s help, I take up my new duties resolved to seek the welfare of all the inhabitants of Northern Ireland.

“During the years of my mother’s reign, it has been a privilege to bear witness to such a devoted life.  May it be granted to us all to fulfil the tasks before us so well. “

Speaking after the visit, Mr Beattie said: “This is a moment in history, a time to reflect and remember the glorious reign of Her Majesty Queen Elizabeth II and at the same time look forward with confidence to the future.”