EVERY striker dreads it but every one has been there.

When you do everything right but somehow just can’t put the ball in the net.

Pádraig Amond has scored over 200 goals in his professional career, including against some of the biggest clubs in England, but as with any striker, he’s been on plenty of streaks where the goals have been hard to come by as well. 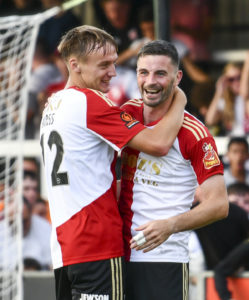 It’s particularly frustrating when a spell like that occurs early on in your time at a new club when you are trying to make a first impression.

Amond dropped down a division to sign for National League side Woking during the summer and was expected to fire the goals to have them competing for promotion, after all, the last time he played in the division he scored 30 goals in 40 games for Grimsby Town in the most prolific season of his career.

The good thing for Amond, and his team, is that while he hasn’t yet scored his unselfish hard work has helped those around him and helped Woking to the brink of the play-off places in the early stages of the season.

Tuesday’s 3-0 win over Oldham means they have taken seven points from their last three games, the ideal response having lost the two games previous to that, and lifted them to eighth in the table.

Amond tweeted after the game to say that he just needs one to go in off his ‘backside’ to make him happy. And that’s the value of experience because Amond knows that once one goes in then there is every chance that the floodgates will open, it’s what he’s done right throughout his career. He will also take heart from the responses to his tweet from Woking fans who clearly appreciate what he can bring to the team aside from his goals.

Amond’s next chance to get open his account for The Cardinals is away against bottom of the table Scunthorpe on Saturday.