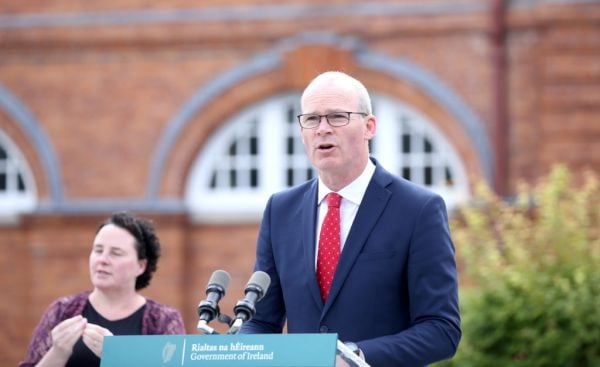 The Government has not ruled out any options to deal with soaring energy costs and will consider the viability of capping householders’ and businesses’ bills, Simon Coveney said.

The Minister for Foreign Affairs said all measures to ease the pressure on households and businesses are being considered, including a price cap or more electricity credits, or a “combination” of both.

He made the comments as the Cabinet meets to discuss proposals on how to deal with spiralling energy costs.

The Government’s Budget will be announced on September 27th.

“The Government hasn’t ruled anything out officially and as late as last night I had a conversation with others in Government in terms of how to deal with the energy crisis as best we can,” Mr Coveney said.

“The issues under consideration which is energy credit to households, we also have to have a support package for businesses, SMEs in particular and we are looking at the viability of a price cap in terms of how we introduce that and what level we could set it at, whether it is partial or full in terms of energy usage.

“We will be talking to other EU countries and we will be seeing what the UK has done in terms of the details of that.

“Let’s not forget in two weeks’ time today we will be announcing a Budget and a big part of that will be responding to the pressures that households and businesses will be facing in terms of energy costs.

“I don’t want to give an indication now if that involves a price cap or financial supports or combination of both but they are all under consideration at the moment.”

Mr Coveney said the Government wants to give householders and businesses “as much certainty as we can” as they face into a winter of “real uncertainty and concern”.

He said it was up to the Government to respond to those pressures and anxieties.

“We need to do that in partnership with other European countries, with the European Commission to ensure that we spend public money,” Mr Coveney added.

“We are effectively giving people back their own money here, we are using public money and taxation to try to reduce the pressures and uncertainty and anxiety that otherwise would be the case if we didn’t intervene.

“If that involves the partial capping of energy prices or it involves some form of extended energy credits over a period of time, that is very much a discussion at the minute.

“The Government is understandably cautious where a Government would intervene to set energy prices but we are living in unprecedented times.

“We have to ensure we have done our homework fully before we commit to something of this scale in terms of cost.

“This is about protecting families through the winter and protecting businesses to stay in business so we will spend a lot of money to protect people from energy inflation.”

Rising energy and living costs are set to dominate the Dáil agenda when it returns on Wednesday following the summer break.

The Dáill will later debate a Sinn Féin motion on measures to help people pay their bills.

Meanwhile, the European Commission president has unveiled a plan to cap the revenues of some companies that produce electricity.

She said that in these times profits “must be shared and channelled” to those who need help the most, adding that the EU’s electricity market must be reformed to tackle high energy costs.

Meanwhile, a professor of energy economics has described EU plans to raise more than €140 billion through a windfall tax as “a neat way to do something difficult.”Professor Lisa Ryan told RTÉ radio’s News at One that the plan so far was “quite good”, it was in a way the “least worse” solution. In many ways the hands of the EU and various governments were tied, but they had to do something quickly.By imposing a tax on the revenues from low-cost electricity generators and making fossil fuel firms share windfall profits, the EU was letting the market “work away” but they were taking back funds for redistribution which was a “relatively clean way” of dealing with the problem of escalating energy costs.However, she cautioned that Ireland’s share of “the pot” would not be a huge amount of money, it had already been estimated at between €1 billion and €2 billion. Any efforts at redistribution should be targeted at the most vulnerable, she said.With regard to plans to encourage off-peak use of energy, Prof Ryan said that even a five percent reduction would help, but 10 percent would be even better and would have an enormous impact. Time of use tariffs could also help. While large energy users were the main target, this was also an opportunity for householders to help reduce energy usage at peak times.