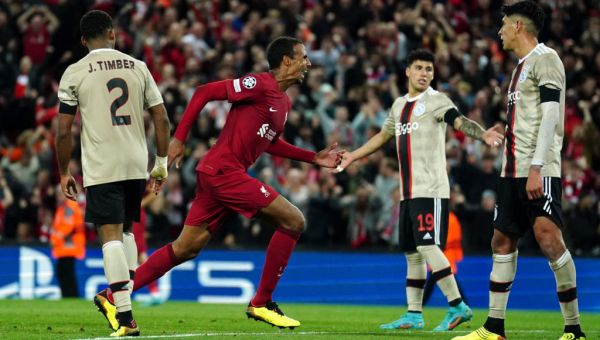 Defender Joel Matip was the unlikely catalyst to get Liverpool’s Champions League campaign back on track as his 89th-minute header secured a laboured 2-1 win over Ajax.

After last week’s 4-1 horror show – as Jurgen Klopp called it – against Napoli their manager wanted a performance of more substance than style.

But, after Mohamed Salah’s first goal in eight European games had put them ahead, more defensive frailties allowed Mohammed Kudus, the striker who was seemingly on his way to Everton before team-mate Antony was sold to Manchester United, to equalise.

A laboured second half, which included a personnel and formation change, failed to produce any genuine threat until Matip rose highest at a corner and his header crossed the line despite the best efforts of Dusan Tadic.

It was the stroke of good fortune the Reds were in desperate need of as, although second-half substitute Darwin Nunez made an impact, the game appeared to be heading towards a frustrating draw until the tall centre-back’s late intervention.

Out of respect following the death of the Queen Liverpool did not play ‘You’ll Never Walk Alone’ pre-match, with the opening bar sounding before being cut off to allow fans to sing unaccompanied.

The period of silence in memory of the Queen was broken briefly by one fan in the Sir Kenny Dalglish Stand chanting ‘Liverpool, Liverpool’, although he was quickly shouted down by those around him, while a couple of fans in the Kop appeared to boo, but not with any conviction and it persuaded Portuguese referee Artur Dias to end the minute prematurely.

Klopp had spoken about the need for his side to reinvent themselves after Naples, but his team selection, with midfield still an area of weakness, was more a series of tweaks than anything radical.

His decision to hand Diogo Jota, their pressing machine, a first start since May after injury instead of big-money summer signing Nunez was a deliberate attempt to inject more energy up front in the expectation it would be replicated behind him.

The Portugal international’s early endeavours were matched by Thiago Alcantara, in his first start since the opening day of the season after injury, but his fellow midfielders Fabinho and Harvey Elliott were not quite at the same level.

Jota’s inclusion paid dividends in the 17th minute when, for only the second time this season, Liverpool scored first as he slid an inviting ball into the penalty area for Salah to tuck a left-footed shot past Remko Pasveer.

But the hosts failed to capitalise on that advantage, with Luis Diaz and Jota blasting wide and Salah failing to get enough on a low Jota cross.

They were made to pay in the 27th minute when their right side was exposed as it has been on numerous times already this season.

Trent Alexander-Arnold allowed Steven Berghuis to run beyond him, Elliot did not track back to cover Steven Bergwijn and that allowed the former Tottenham forward to run across the path of Virgil van Dijk to give Kudus the space to lash in a shot off the underside of the crossbar.

Without injured captain Jordan Henderson Liverpool’s right side look defensively susceptible and at the moment the current set-up is not offering enough going forward to offset their deficiencies in the opposite direction.

They continued to create chances without properly threatening, with Alexander-Arnold, becoming the youngest Liverpool player to play 50 European games, dipping a volley just over.

He later forced a double save out of Pasveer, with Van Dijk seeing one header well saved by the goalkeeper, who enjoyed a stroke of luck as the rebound off Devyne Rensch landed back in his hands.

Jota and Elliott were replaced by Roberto Firmino and Nunez just past the hour as Liverpool switched to 4-2-3-1, but it actually made things more chaotic as they continued to concede possession in midfield, allowing the unmarked Daley Blind to steer a header across goal and just past the far post.

Nunez rolled a shot wide after good interplay between Firmino and Salah and then the Uruguayan flashed a cross through the six-yard area which was nicked past the waiting Diaz.

But when Salah’s deflected shot looped on to the upright Matip pounced from the resulting corner to get last season’s beaten finalists up and running.