EIGHGT AIG All-Ireland Champions have been crowned over the past two weeks at the AIG Cups and Shields All-Ireland Finals in Tramore and PGA Slieve Russell.

The action continues this week at Knightsbrook Hotel, Spa and Golf Resort with the conclusion of the AIG Intermediate Cup, AIG Pierce Purcell Shield and the AIG Men’s and Women’s Junior Cup.

Sixteen quarter-finalists are confirmed for each event with Edmondstown fielding teams in two categories, while East Cork and Castle return in a bid of their second AIG title of the season. 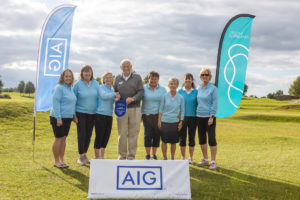 In the AIG Pierce Purcell Shield, Lismore, Lisburn, Dooks, Mayobridge, Clontarf, Castlebar, Edmondstown and Abbeyleix will all compete for the title.

Fota Island, Royal Portrush, Tralee, Clandeboye, Royal Tara, Castlebar, Newlands and Tullamore will be in action in the AIG Women’s Junior Cup which begins on Friday, while the men’s edition beginning on Saturday will include Co. Cavan, Castle, Castletroy, Cork, Carrickfergus, Dundalk, Co. Sligo and Mountrath.

Play begins on Thursday from 8.00am with the AIG Intermediate Cup and AIG Pierce Purcell Shield quarter-finals with the finals of each event taking place on Saturday and Sunday afternoon.