Simon Coveney on visit to Ukraine to show Ireland’s support 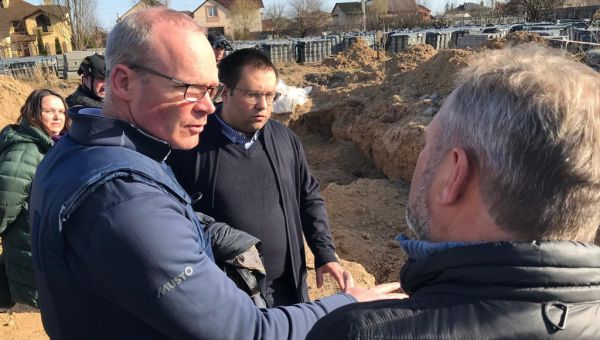 Minister for Foreign Affairs Simon Coveney is visiting Ukraine to establish facts about the ongoing war and reiterate support for the country.

Mr Coveney will visit Odesa port in southern Ukraine on Wednesday to see the operation of the Black Sea Grain Initiative.

It is the second time Mr Coveney has travelled to Ukraine in recent months.

Minister for Foreign Affairs, @simoncoveney, is in Ukraine today.

He said the purpose of the trip was to continue to show solidarity with Ukraine and get a detailed update from Mr Kuleba.

Mr Coveney is in Ukraine along with his Lithuanian counterpart, foreign minister Gabrielius Landsbergis.

The Foreign Affairs Minister said the visit will help Ireland in making “appropriate contributions” based on facts from the ground.

The Black Sea Grain Initiative is part of a mechanism to export grain and other crops from Ukraine to ease the pressure on the global food crisis.

“This has been one of the successes over the last number of months for the UN to get agreement, and co-ordinate with Turkey, between Russia and Ukraine to facilitate the export of millions of tonnes of grain and other agricultural products out of Odesa, where they had effectively been piling up and were in danger of rotting,” Mr Coveney told RTÉ.

“Almost a quarter of the world’s traded grain comes from Ukraine and Russia, so it has been having an enormous impact on food security in parts of the world that are already finding it difficult to feed their people. It has also had a huge impact on grain prices and food prices in Ireland and around the world.”

“It’s important that we understand what is actually happening on the ground because there is a lot of misinformation out there,” he added.

“So far this initiative has allowed three million tonnes of grain to get out of Odesa and to ports.

“Ships get escorted by the Ukraine coastguard and then guided effectively to Istanbul where they get inspected by Ukrainian, Russian and UN officials, and then they are allowed on their way.

“So far, around 140 ships have been allowed into the port of Odesa through this mechanism, and we think that as this initiative progresses and more confidence grows in its safety it could export up to five million tonnes of grain out of Odesa on a monthly basis, which would make a huge difference in terms of food security and grain prices across the EU.”