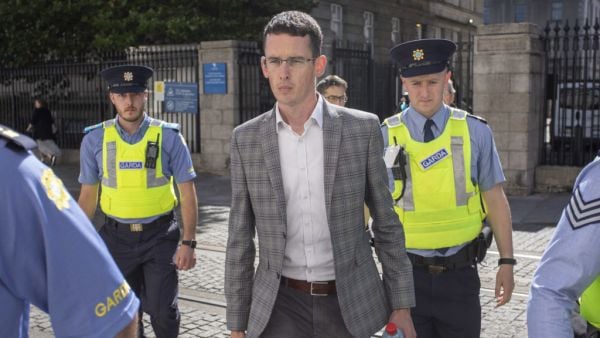 Teacher Enoch Burke is to remain behind bars after a Judge refused to grant him an order that would end his ongoing suspension from work.

His employer’s decision to suspend him on full pay underpins other High Court orders preventing from attending or teaching at Wilson’s Hospital School in Co Westmeath, and one keeping him in Mountjoy Prison arising out of his refusal to comply with the injunction.

Mr Burke, who objects to addressing a student with the pronoun “they” and opposes Transgenderism, was committed to prison last week until he agrees to obey the order not to attend at or attempt to teach any classes at the school.

At the High Court on Wednesday Ms Justice Eileen Roberts refused to grant Mr Burke an order contained in a counterclaim challenging his suspension.

Before a packed Court 1 in the Four Courts the judge said she was refusing the order, which was opposed by the school’s, on grounds including that Mr Burke had not at this stage made out a strong case that would be likely to succeed at the full hearing of the action, and that the balance of justice favour the dismissal of his application.

Many of the issues raised by Mr Burke are issues that have to be determined at the full hearing of the dispute and not at this stage of the proceedings, the judge added.

The court also said that under the terms of a Dept of Education circular concerning disciplinary action against teachers the school’s board of management was entitled to place him on paid leave, pending the outcome of the disciplinary process.

Following the court’s decision Mr Burke was invited by the judge, who accepted the Mr Burke holds genuine religious views, to consider purging his contempt.

Mr Burke, who criticised other judges for their decisions to take away his liberty and described himself as a law-abiding citizen whose first loyalty is to god, repeated his intention not to comply with the order against him.

Ms Justice Roberts informed Mr Burke that he can secure his release by purging his contempt at any time.

The History and German teacher was suspended on full pay late last August pending an investigation into alleged misconduct, which he denies.

Arising out of his refusal to stay away from the campus the school’s board of management obtained a High Court injunction against him.

His refusal to comply with that order resulted in his incarceration at Mountjoy prison for contempt of court.

Mr Burke claims that his opposition to a direction by his employer to address a student at the school, who wishes to transition, by the pronoun ‘they’ and by a different name is contrary to his Christian beliefs.

He says that the suspension is unlawful, unfair and unreasonable and in breach of his constitutional rights to religion, freedom of expression and conscience.

During Wednesday’s sitting of the court the school opposed his application to lift the school’s decision to put him on paid administrative leave.

Rosemary Mallon Bl for the school argued that what Mr Burke was effectively trying to do was get the High Court to overturn another order of the High Court, which he is not entitled to do.

Ms Mallon also repeated her arguments to the court that the case before the judge was not about the teacher’s opposition to Transgendarism, but was about his refusal to obey an order of the court.

Earlier this week Mr Burke launched his own proceedings against the school where he seeks various orders and declarations including a declaration that the disciplinary process against him is unlawful and a breach of his constitutional rights, including his rights to freedom of expression, conscience, and religion.

He also seeks various orders preventing the school from continuing both his paid administrative leave, and the disciplinary process against him.

He further seeks an order preventing the school from dismissing him from his position.

That application was adjourned after the school gave undertaking not to go ahead with a planned disciplinary meeting due for today (Wednesday).

The school also agreed that no disciplinary meeting will take unless Mr Burke is given three-day advance notice.

The only issue left arising out of that application was the question of whether the court should grant Mr Burke an injunction in relation to his ongoing suspension.

The school, located in Multyfarnham Co Westmeath is the Church of Ireland’s Diocesan School for Meath and Kildare.

It claims that his refusal to comply with the injunction was disruptive to the school’s students at the beginning of the new academic year.

The court heard that Mr Burke was placed on paid administrative leave pending the outcome of a disciplinary process commenced by the school, where he has been employed for several years.

That process commenced after it is alleged that Mr Burke publicly voiced his alleged opposition to the school’s principal direction to address a student, who wishes to transition, by a different name and by using the pronoun “they” rather than he or she.

The school’s Board of Management secured a High Court order against Mr Burke preventing him from attending or teaching any classes at the school after he refused to abide by either the terms of his suspension and the injunction.

The school claimed he would continue to attend the premises, in accordance with the teaching timetable assigned to him prior to his suspension, unless he was committed to prison.

The school says despite his suspension Mr Burke has not been sanctioned and no finding has been made against him.

The disciplinary process arose after the teacher objected to a request by the school, based on a request from a student and their parents, earlier this year to address a student, who wishes to transition, by a different name and to use the pronoun ‘they’ going forward.

In correspondence to Mr Burke the school denied that anyone is being ‘forced’ to do anything.

The school said that it is focusing on the needs and welfare of its students and is affirming its policy in accordance with the 2000 Equal Status Act of not discriminating against any student.

The school claims that last June a service and dinner was held to mark its 260th anniversary.

It was attended by clergy, staff, past and present pupils, parents, and board members.

It is claimed that Mr Burke interrupted the service and said that the school’s then principal, Ms Niamh McShane, should withdraw the earlier demand regarding the student.

It is also claimed that he said that he could not agree with transgenderism, and said it went against the school’s ethos and the teaching of the Church of Ireland.

The school claims that after he spoke members of the congregation and students walked out of the school chapel where the service was being conducted.

It is claimed that at the follow-up dinner Mr Burke did not sit at any table.

After the meal he is alleged to have approached the Principal, and again asked her to withdraw the request regarding the student.

Arising out of Mr Burke’s alleged conduct a disciplinary process was commenced, and considered by the board, resulting in a decision to place him on administrative leave pending the outcome of the process.

In a sworn statement to the court Mr Burke said he rejects claim made by the former school principal Niamh McShane that he questioned her loudly at the function.

He said her allegation against him that he followed her around the school’s dining hall and questioned her loudly after she tied to walk away from him was “entirely false”.