THE Game of My Life, a book featuring stories by  30 Carlow GAA sports stars,  which was written by John Kelly was launched in Tinryland on Thursday. Some players who made contributions to the book were present. These included Paul Broderick and Tommy Dwyer of the Tinryland club as well as Tommy Corcoran of Éire Óg. Author, John Kelly, who is a former Tinryland clubman himself is now living in Castleisland with his wife and three children. The work was published by Herobooks whose founder is the former Meath footballer, Liam Hayes,  was present at the launch.

For John, the work is a labour of love.

“Anyone who knows me, know how much I am into Carlow GAA. I used to do a bit of writing and have always had the bug. To marry the two and to write about Carlow GAA was a dream to do it,” he said.

John Kelly (2nd left) is shown with Liam Hayes, Paul Broderick, Diarmuid Walshe, Danny Moran and Shane Townsend during the launch of his book “Game of my Life” in the Tinryland GAA clubhouse. Photo: michaelorourkephotography.ie

The Castleisland resident said that when he started meeting players and writing up their tales,  he never realised how far it would take him.

“There are some fantastic stories. When I sat down to write this I didn’t think of talking of drinking poteen at matches or having a sing-song with Linda Martin and chips would be in the book. But it was.

“That is just Tommy Dwyer’s story, never mind anyone else,” revealed Kelly who was sensitive in his research. 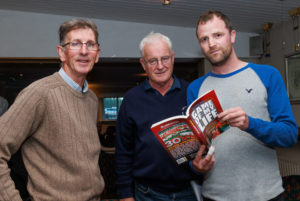 John Kelly (right) is shown with Kieran Murphy and Eamonn Byrne during the launch of his book “Game of my Life” in the Tinryland GAA clubhouse. Photo: michaelorourkephotography.ie

“It is not just football. Players talk about families and loved ones. There are some mentions of people who are not with us anymore. Some of it is very personal and people opened up to me and told me their stories.”

The author insisted this work should be shared among all Carlow GAA folk. 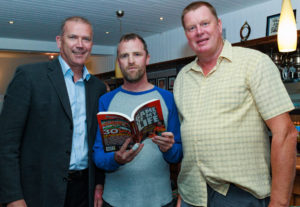 John Kelly (centre) is shown with Tommy Dwyer and Liam Hayes during the launch of his book “Game of my Life” in the Tinryland GAA clubhouse. Photo: michaelorourkephotography.ie

Liam Hayes recalled that he has links to Carlow.

“When I was managing Carlow in 2004-05, I was honoured to manage Carlow. I couldn’t impress on you how strongly I felt about that. To go back and manage my Dad’s county was just unbelievable,” the All-Ireland medal winner said.

He recalled Meath scraping over Carlow in a 1986 championship game.

“Carlow had us dead but couldn’t bury us. They hit the post in the last minutes of the game. We were all on a knife-edge and were glad to get out of Dr Cullen Park. 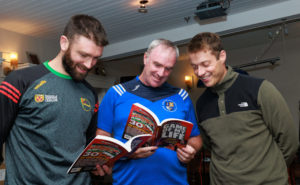 Shane Townsend, Stephen O’Meara and Paul Broderick look over tJohn Kelly’s book “”Game of my Life” which was launched in the Tinryland GAA clubhouse. Photo: michaelorourkephotography.ie

The book was also launched in the Éire Óg clubhouse on Friday while there are three further launches scheduled for venues around the county and will be in Palatine GAA Club on Friday 16 September.

‘Carlow: Game of my Life’ is published by Hero Books and is available in all good bookstores (and also on Amazon as an ebook  €9.99, paperback €20 and hardback €25) 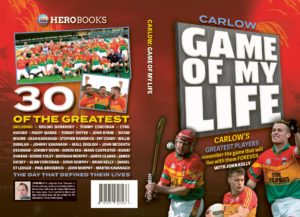 Filed under: Carlow GAA, Game of my Life