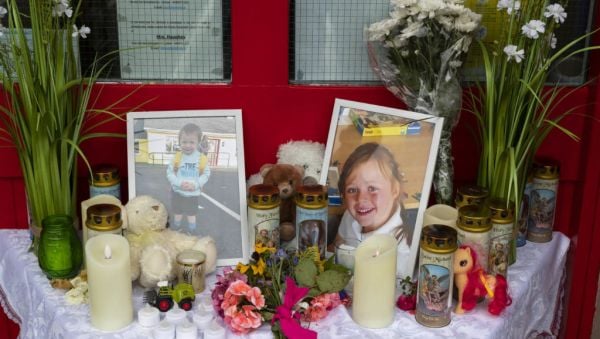 The funeral has taken place of two children who tragically died in a car fire in Co Westmeath last Friday.

Five-year-old Thelma Dennany and her two-year-old brother Mikey died after the car they were travelling in with their mother was set on fire in what gardaí now suspect was a deliberate act.

The two children were brought into St Mel’s Cathedral in Longford in a double coffin this morning, and Fr Sean Casey told mourners the siblings were inseparable.

“They were inseparable in life and in the words of their Dad Michael ‘the only thing that separated them was school as they went their separate ways each morning'”.

‘Thelma attend dancing classes and football training and Mikey always came to watch her from the sideline,” he said.

Gardaí say a criminal investigation into the incident is continuing.

Speaking to RTÉ’s News At One on Monday, Mr Harris confirmed the investigation, which is being carried out by detectives based at Mullingar Garda station, is being treated as a criminal matter.

“In particular, we would ask the public for their support in helping us in the investigation. Anybody who was moving in the Lacken, Multyfarnham area last Friday between about 2pm and 3.30pm-3.40pm – if they took dashcam footage, if they saw anything suspicious, please report it to gardaí,” Mr Harris said.