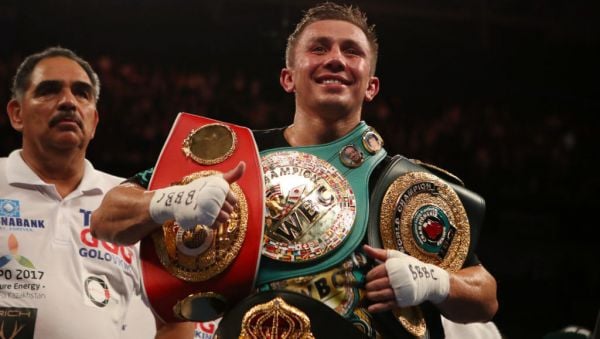 Gennady Golovkin faces a step into the unknown against Saul ‘Canelo’ Alvarez but rejected the idea his legacy hinges on a win in this much-anticipated trilogy fight.

In Las Vegas this weekend, the 40-year-old Kazakh makes his first significant foray out of the 160lb middleweight division in which he has won multiple world titles to challenge his bitter Mexican rival.

Alvarez escaped with a highly disputed draw in their first fight in September 2017 before being given the nod narrowly on points the following year, the only blemishes in Golovkin’s 44-fight career.

Their third contest will take place at the 168lb super-middleweight limit, where Alvarez holds all four major world titles and is favourite to once again prevail over an opponent eight years his senior.

The wait is almost over 💥 Are you ready for the #triloGGGy?#caneloGGG3 on https://t.co/wP4wIpVIZY, Sept 17 pic.twitter.com/FxocEeClhh

However, Golovkin, a two-time unified world middleweight champion, stressed he is not placing any additional significance on Saturday night’s showdown and that his accomplishments speak for themselves.

He told the PA news agency: “Without any doubt this fight is not going to affect my legacy. Name me a boxer who would not be happy with a career like mine with all my achievements?

“I do not feel any pressure and I do not think I need to prove anything to anybody.

“To me it’s just another fight, a fight people have been wanting to see for a long period of time and now it’s actually coming to reality.”

Golovkin has never previously weighed in heavier than the 163lbs he scaled three years ago prior to facing Steve Rolls but is unfazed at the unfamiliar situation he will find himself in.

As for whether he will carry up his vaunted power – of Golovkin’s 42 wins, 37 have come inside the distance – the veteran said: “I know I will feel a little bit differently in the new weight division.

While Golovkin and Alvarez have shared 24 rounds in Sin City and countless more in sparring earlier in their careers, four years have passed since their last fight as they went their separate ways.

Golovkin rebounded with four successive wins and regained world titles he relinquished to Alvarez, who conquered super-middleweight before a surprising loss against Dmitry Bivol at light-heavyweight in May.

That has paved the way for this third encounter, to be screened on DAZN, between fighters who do not see eye-to-eye.

Golovkin admitted there were times when he thought it would not come to fruition.

Golovkin added: “I had some doubts about this third fight taking place. I kind of thought if he decided to challenge me that it would probably be when I was 50. Without any doubt. I’m excited about it.”