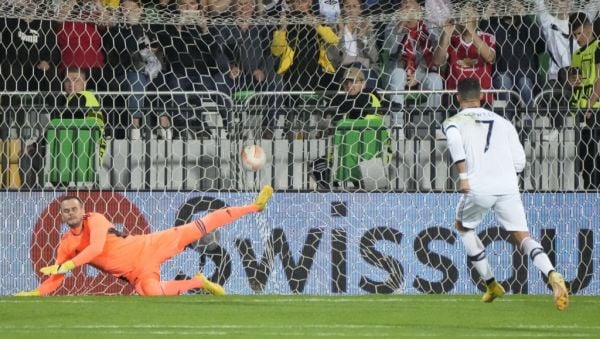 Erik Ten Hag was pleased to see Cristiano Ronaldo on target as Manchester United kickstarted their Europa League campaign with a comfortable victory over Sheriff Tiraspol in Moldova.

Ronaldo struck with a 39th-minute penalty as United claimed their first points of the group stage with a routine 2-0 victory on Thursday.

It was Ronaldo’s first goal of the season from only his third start after a disrupted summer in which he had hoped to move away from Old Trafford.

The Portuguese missed Ten Hag’s first pre-season tour as United boss for personal reasons and was then the subject of speculation about his future until the transfer window closed.

That contributed to his slow start but Ten Hag has no doubts about his commitment.

The Dutchman said in his post-match press conference: “We could expect this when you miss pre-season so he has to work really hard and invest to get the right fitness then he will score more goals.

“You see also connections coming around him and he is constructing connections so I am happy with that.”

He added on MUTV: “He needed that goal. He was close many times. You (could) see he wanted that so much (but) every time a foot was in between or it got a deflection or a misunderstanding.

“We’re happy for him and the team wanted him to bring the goal, so that’s good.”

Jadon Sancho had opened the scoring for United in the 17th minute, just hours after being omitted from the England squad.

“I’m really pleased for him,” said Ten Hag. “Another goal and he’s scored already many goals in pre-season. I think this is his third in the season.

“He’s doing well but I think there’s much more room for improvement for him because he has so much skills, so bring it on the pitch.

“When he has the belief, I think he can even be more productive.”

United were hardly troubled by the Moldovan champions in Chisinau as they bounced back from their loss to Real Sociedad in their Group E opener last week.

Ten Hag said: “It was a difficult start (against) an opponent that really played direct, opportune and go for second balls.

“We lost too many balls at the start of the game but after a certain period, when I think when we found a better formation, we could play between the lines.

“We get depth in our game and we scored a great goal, and I think from that moment on we dictated the game totally.”