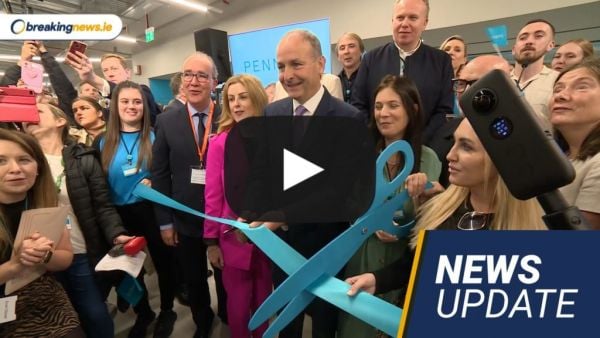 The Taoiseach has indicated he would be open to allowing former party colleague Bertie Ahern back into the party.

Micheál Martin said that he has been engaging with the former taoiseach in recent times, particularly about issues around the Northern Ireland Protocol.

On Wednesday evening, it was proposed during the Fianna Fáil parliamentary party that Mr Ahern should be allowed to make a return to the party as part of its plans to mark the 25th anniversary of the Good Friday Agreement.

Spanish police said on Thursday they had arrested the head of one of Europe’s biggest money-laundering rings, which had ties to the Kinahan drug gang and used the sale of high-end vodka to restaurants as a cover.

A police spokesman said John Francis Morrissey, the high-profile ringleader and head of the Spanish operation, was arrested on Monday.

In total, three people were arrested in Spain and one in England, police said in a statement.

Mourners at a funeral mass for two children who died in a car fire in Co Westmeath have heard the siblings were “inseparable in life” and would now explore the “highways and byways of heaven” together.

Five-year-old Thelma Dennany and her two-year old brother Mikey Dennany died after a blaze in a car on a rural road at Lacken, Multyfarnham.

Hundreds of people attended the funeral at St Mel’s Cathedral in Longford, ahead of the children’s burial in Cullyfad Cemetery.

The Office of Public Works (OPW) said they are recruiting up to 250 staff over the 12 months.

The roles will range from high-value civil and structural engineering.

With investment in some of its heritage sites co-funded by the Department of Tourism, Culture and Arts, the OPW is also recruiting over 100 heritage related positions.

The ongoing and accelerated recruitment campaign comes as a result of increased funding secured under the National Development Plan (NDP) 2021 – 2030.

The High Court has ordered all persons who are allegedly illegally occupying a building in central Dublin that is due to be converted into over 500 residential units to immediately vacate the premises.

The owners and developers of Parkgate House, in Dublin 8 claimed that the building had been illegally taken over by members of a group calling itself ‘The Revolutionary Housing League’, which had been using to provide accommodation for the homeless.

On Thursday Ms Justice Eileen Roberts granted the building’s owners, financial fund Davy Platform ICAV, acting on behalf of its sub-fund the Phoenix Sub-fund, and Ruirside Developments, which is to develop the site into 519 rental units and other amenities an injunction requiring the building to be vacated.