TOM Daly will start for Connacht at centre in tomorrow’s BKT URC opener against Ulster at Kingspan Stadium (k/o 7.35pm).

Daly starts in midfield alongside fellow Tom, Farrell, as they resume a partnership that has worked very well in the past. 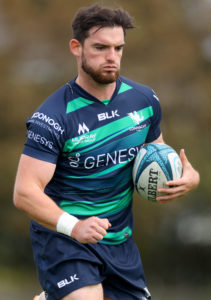 Tom Daly will start at centre for Connacht in their first game of the season against Ulster
Photo: ©INPHO/James Crombie

Gavin Thornbury will captain Connacht for the first time in his 64th appearance for the province in a squad that includes three debutants and a possible two more off the bench.

Peter Dooley, Josh Murphy and Byron Ralston have all been handed their first Connacht cap, with Shamus Hurley-Langton and David Hawkshaw also potential debutants off the bench.

Dooley is named in a front row with Jack Aungier and hooker Dave Heffernan, while Leva Fifita partners Thornbury in the second row. The pack is completed by flanker Conor Oliver and number 8 Paul Boyle.

Kieran Marmion and Conor Fitzgerald are paired together at 9 and 10. Ralston’s first game will be on the right wing, with John Porch on the opposite wing and Tiernan O’Halloran at full-back.

“We’ve had a very positive pre-season and there’s now a huge sense of excitement among the group. There’s a genuine belief and optimism about what we can achieve in this first block of games, which all starts in Belfast tomorrow night.

Ulster are a quality side and our battles against them are always hard fought. We’re really looking forward going head-to-head with them in what should be a great season opener for us both.”