TULLOW rugby player, Dannah O’Brien has burst onto the Irish rugby scene.  When she played for Ireland in the recent tour of Japan, she completed a remarkable feat by earning two full caps for her country before making an interprovincial appearance for Leinster seniors. 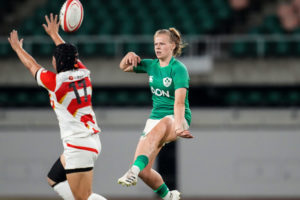 Dannah O’Brien in action on her international debut in Japan
Photo: ©INPHO/Akito Iwamoto

Her rise from a Paul Flood Cup winner with Tullow and under 18 Leinster player to playing for Ireland is incredible.

Earlier in the season Dannah, who lives in Kilbride,  was placed into the Irish Talent Development unit.  From there, she was selected on the Irish squad for the August two-match tour of Japan.  In The Land of the Rising Sun, she exceeded all her expectations starting and finishing both internationals and in the process scored six conversions as Ireland beat their hosts, 57-22 in the opening match. In the second test, Japan prevailed 29-10 but the Tullow player had arrived.

She relates the sequence of events which saw her win her first full cap.

“I got an e-mail before  the summer to say I was selected for a trial for Japan. It was a two-day camp in Dublin. 40 girls there. All mixed up and I played a trial match on the Sunday. The squad was selected from that weekend.

“Luckily the trial went very well for me and Greg McWilliams (the Irish coach) decided to bring me to Japan,” recalled the Tullow rugby player.

In the hours leading up to the announcement of the squad, there had been an agonising wait for her .

“You would be on your phone waiting. You have a rough idea when the e-mails are going out at. You keep refreshing. I was at home with my family. I was quiet enough. I don’t think I told anyone what time the e-mail was coming out at,” she recalled.

Then came the great news. She was in.

There was no grandiose opening sentence informing her that she had been selected to represent her country.

The e-mail went something like…….”The following have been selected for the Japan tour.”

Scanning down  the list of 29,  Dannah immediately saw that she had been selected.

“Amazing. A feeling of disbelief really,” she confessed.

Japan was a place that she thought she might visit sometime. Now, she was going there to represent her country.

She absorbed the preparation procedures.

“We were kitted out which included a week in camp with jersey fittings, gear fittings, pictures. We trained that week as well and we were well-prepped by then.”

Nothing could have prepared the players for the change in weather conditions. As the team stepped off the plane they were hit by a blast of heat.

“It was like being in a sauna. Before the first match we were out there a full-week. We had done some heat sessions in Dublin that probably helped as well but it takes a good while to get used to it,” related Dannah.

The Irish trained in Hamamatsu which was about an hour’s drive from Tokyo.

“They had unbelievable facilities,” Dannah recalled.

“It was very well air-conditioned inside but as soon as you stepped on to the training field you feel as if you are in a sauna. It reached 40 degrees on one of the days.”

As the training sessions developed in the lead-up to the first test at the Ecopa (Ogasayama) Stadium, O’Brien suspected she might be in line for selection. When the team was announced she was in at out-half.

“I had an inkling. Nicole Cronin had previously played scrum-half and number ten for Ireland. She had a few injuries in camp that week. Sometimes,  she was involved in training, sometimes,  not involved. I had suspicion that I could be playing but behind everything I hadn’t a clue I would be starting that day.”

Dannah was one of six new caps included in the first fifteen for the opening game. The Tullow sports star says the coaching team backed the players.

“I don’t know what Greg had in his mind. He was taking a massive risk. It could have gone terribly wrong. He had faith in the younger players and he wanted the talent to be seen. He knows what he is doing. He has coached St Michaels for years. He has coached the under 20s,” said Dannah.

When she was handed the number ten jersey, the enormity of what was happening really hit her. 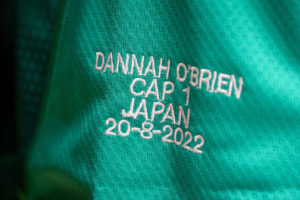 A view of Dannah O’Brien’s jersey ahead of her first international appearance
Photo: ©INPHO/Akito Iwamoto

“Probably the most nervous I have ever been in my life,” she admitted.

“You could probably see how nervous I was on the TV. I think I grew into it after the first few minutes and I started to realise it was only the same game which I have been playing all my life.”

In that opening period, Ireland found themselves 15 points in arrears. There was no reason to panic.

“We let in two easy tries. We didn’t put their heads down. We had done the preparation. We had faith in our system and we got to show our skill-set after the first twenty minutes,” recalled Ireland’s new out-half.

The Irish hit back scoring nine tries with O’Brien landing six conversions. What was even more satisfying was that she was pulling the strings in the number ten position and many of the scores came from perfectly timed passes and releases from the Tullow player.

“The first conversion set me up. Once that went well for me, I had a lot of faith in myself that I could continue.”

The entire squad was on a high after the win. Yet the newly capped teenager displayed degrees of professionalism which belied her age.

“It is still very surreal. During the first match, you are running off adrenaline. You are very excited before the match and during the match. After the match I got this low. The adrenaline buzz was gone.

Despite doing so well, Dannah never took it for granted that she would be selected for the second test in Chichibunomiya.

Again,  she was in but this time, Ireland was unable to reach the heights against a side who are preparing to play in the Covid delayed 2021 World Rugby Cup in New Zealand. Yet O’Brien says they learned a lot from a 29-10 defeat. 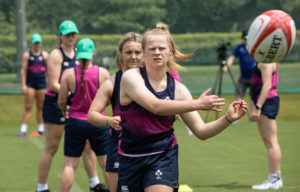 Dannah O’Brien in training with the Irish squad in Japan
Photo: ©IRFU/Ryan Bailey

“There wasn’t as good a buzz as there was the first week. We had a few injuries. We went at it. We had a lot of faith going into that game as well but it didn’t go our way It was an opportunity for them to try a few things. They looked strong in the second game,” admitted Danah.

She is home now and the next stage of her academic and sporting life awaits the former Tullow Community College student. She is going into her first year of a Finance and Accountancy Course in DCU. She has signed for Old Belvedere and made a brilliant AIL debut last weekend when she was introduced from the bench and kicked three crucial points in a 14-5 win over UL Bohemians.

“I want to strike the balance between the two,” she says. She has goals but nothing is taken for granted.

“You are always looking forward to the next selection. I want to play as much as I can for Old Belvedere. There will be weekly goals. Ireland selection is the next goal.  Japan was an amazing experience.  It was  a friendly test tour. Six-Nations is next and hopefully I will be there,” Dannah confides.