Someone might suggest that this will be a chance for Rangers to get a modicum of revenge for being defeated by the Gaels in the senior hurling semi-final this year. Nothing could be further from the truth. This is a game between the football sides now. Rangers will hardly be facilitated for goals the way they were against Rathvilly. Bagenalstown Gaels seem to be a second half team and would need to remedy this.

If it is tight, Bagenalstown Gaels should prevail but if Rangers get away they are sure to dig in. 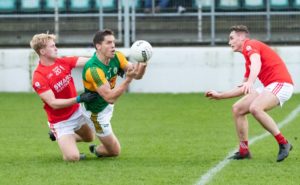 Éire Óg and Rathvilly have had some great battles in recent years but one will be exiting the Championship at the quarter-final stage on Sunday
Photo: michaelorourkephotography.ie

What is going on here? This was supposed to be the final. Now one of them is going to exit. Neither side have fired in the championship and between them they collected five group points in six matches.  Éire Óg have excuses in that they have been without key players but Rathvilly are just not firing. It happens. At some stage they will and what better game to find their mojo than against very intense rivals. Éire Óg are hurting too. This will be a battle.

Two hard-earned draws in the group stages for Grange are an indication of a side who will not settle for second best without a hell of a fight. The Myshall side showed great character to  overhaul an eight point deficit in their opening group game against Éire Óg but they have not built on it.

A lot could depend on the weather here. If the ground is wet and slippy, it might suit Kildavin-Clonegal who are better set up to battle and wage war. On the other hand, a dry pitch would facilitate St Patrick’s speedier forwards where Jack Kennedy is hard to mark.

When Leighlinbridge lost their opening game to Clonmore by a 17 point margin, they looked to be in trouble but they bounced back well to win their next two games and it would be hard to back against them here.