AS Wexford Youths beat Cork City 5-1 last Saturday night to go top of the table, there was a special milestone for the side’s captain from Graiguecullen, Kylie Murphy who brought up her 100th Women’s National League goal. As always, Murphy was modest and said that the three points were more important. 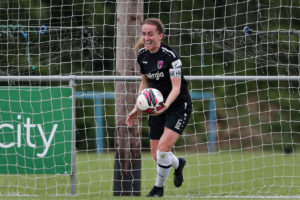 Kylie Murphy celebrates one of her 100 goals in the Womens National League
Photo: ©INPHO/Brian Reilly-Troy

“It’s amazing isn’t it really. It is to be fair [a good record], yeah it is, I don’t really know what else to say about it really. I’m absolutely buzzing, I’m privileged to have worn the jersey that many times to be able to score that many goals, let alone how many other times I’ve worn it. I’m delighted. Funny story, our kit man, Eddie Cullen about six or seven games ago said to me I was on 97 goals and I swear he cursed me because I went on a goal drought and I said to him don’t ever tell me something like that again. So, he never opened his mouth again and nothing was said about it again. I knew it was coming but it wasn’t about getting my 100 goals, it was about the team and getting the three points, I could easily have gone and taken the peno off Aoibheann but it wasn’t about me scoring, it was about the team. The lads were very good, they gave me a little thing at the end of the game, it was nice.”

The Wexford Youths captain from Graiguecullen turned 37 ten days ago and had a season to remember last season where she won multiple awards for her performances, including a goal in the FAI Women’s Cup Final against Shelbourne. However this season, she has struggled. She hasn’t been able to find the goal scoring form that saw her finish just short of eventual Golden Boot winner, Aine O’Gorman and has struggled at times. She admits that it’s been a tough season for her, citing the recent passing of her mother as a huge burden that’s been hard to shake off.

“I’m after having a rough year, I don’t leave any stone unturned though so I am doing the absolute best I can right now, it mightn’t be as good as last season, I just don’t have that in me at the moment. I’m happy to be getting back on the scoresheet though, for me that’s something I always want to be doing, whether I’m playing up top or more so in the ten this season but I still want to be scoring, I still want to be contributing, whether it’s scoring or giving assists, that’s a part of my game that I have to be contributing in so I’m happy to have got it back.

“I was taking care of my mam for a very long time, there was a lot of torment and I was worrying for her and then she passed away, which was hard. It’s just been really hard, I got back at it really quickly, I went back straight away, she would never have wanted me to miss a game, she loved me playing. The team has helped, they genuinely are like family, they make everything better, I get to go training, play games and I don’t have to think about anything which is nice. I do love it but it’s been a long process, mammy was sick for over a year and a half so that was obviously very tough to watch her go through that. I might never be as good as I was last year, maybe that’s the best I can be. I’m convinced that there’s professional soccer players out there who will never do what I did last season. It’s very, very hard to keep doing that and keep sustaining that. It’s been a tough year that’s all, I’m looking forward to a break that’s for sure, I don’t know whether it will be a long break or not, I’m not too sure yet where I’m at with that, I’ll just wait and see how the next couple of weeks go.”

With Murphy struggling, she’s also removed herself as designated penalty taker, saying that she felt she lacked the confidence needed to take them.

“My confidence took a bit of a knock, and I said to myself it’s time to step away now. I had a chat with Stephen [Quinn, manager] and he said it’s up to you. I have said to Aoibheann though that if she’s ever not feeling it, to give me a nod and I’ll happily take it for her. I just missed a couple at the start of the season and it got to a point where I was nearly like oh I hope we don’t get a penalty, I was that low in confidence and I can’t be feeling like that and if we get a penalty we need to feel confident in who’s taking it, I didn’t want the players to not feel confident in me, not that they were but I felt like they were and it’s my responsibility to make sure that it doesn’t happen for the good of the team.”

Having hinted at possibly retiring at the end of the season, Murphy said that she will likely take a full break from the sport, saying that coaching is not something she’s thought about and wondered whether the club would even want her back as a coach. “I’m not too sure at the moment, a break will definitely be needed. It’s a huge commitment, I can give it as a player for the love of the game but maybe not as a coach. Maybe something might change, something might click but at the moment I don’t even know if I’d be a good coach, I don’t even know what Wexford are thinking right now so until it comes up it’s hard to know but I’ll definitely be looking to give back to them, I’ve made so many friends from it, they’re like a family to me.”

When The Nationalist last caught up with Wexford Youths captain Kylie Murphy in July, her side were sitting seven points behind leaders Shelbourne and had just come off the back of a disappointing defeat against Galway and things were looking bleak for them. Injuries and absences with players sitting their Leaving Certs had hampered them. However, over the past couple of months they have found a run of form whilst Shels have struggled slightly, to the point where Wexford now sit a point ahead of the league leaders with a game between the two on the final day possibly set to be the decider. However, before that that, there is a tough run in awaiting both sides with games against Athlone and Peamount awaiting. Wexford also have a tough cup semi-final against Athlone coming up at the end of the month. 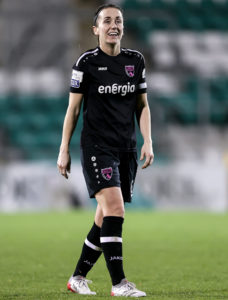 Wexford Youths’ Kylie Murphy is aiming for a league and cup double in the coming weeks
Photo: ©INPHO/Laszlo Geczo

Murphy said that it’s all to play for now. “Both trophies are up for grabs at the moment. Things weren’t looking good, there was a possibility of Shels being eleven points ahead of us but us beating them brought us a bit closer together. We’ve had some silly silly draws, games that we conceded in the last minute but that’s the nature of the game and Shels are after having the same in a couple of games themselves. If you’d spoken to me at the midseason break, I’d have said they nearly had it wrapped up but it just goes to show how quickly things change, it’s why we love football.”

Her teammate, Lauren Dwyer, also from Carlow, has been out the season with an injury and Kylie says that she’s a huge loss and that her absence has had repercussions for the team. “I speak so highly of Lauren, she’s a game winner, she’s been out for the whole season so we’ve had to rejig our formation because Lauren is that good. It’s hard, to be without a player like her for a whole season, is huge.”

Emma Walker is a talented youngster coming through the Wexford ranks and another local girl who is actually Murphy’s neighbour, living just a few doors down. She has scored 20 goals for the U19’s this year and has scored two goals in three senior starts this season and is a promising prospect for the future and Murphy was full of praise for the talented teenager.

“She’s absolutely flying it, she’s got like 20 goals for the U19’s and she’s after getting a couple of senior goals too, I’m telling you now, she’s one for the future. Last season she was branching out into the senior squad and she was training with us but by god that girl is something special and I’ve seen the difference in her this season, she’s not one bit out of place in the senior training or senior squad. Her fitness levels have come up immensely, her reactions, her soccer, everything, she’s just an all-rounder. To score 20 goals in any season is remarkable, I was only joking with her at training saying that she’s definitely going to get to 30. She’s just a baller out and out, a really good player, she’s a really good kid and I love having her around the senior squad because she’s such good craic as well. She only lives a couple of doors down from me, I did push her to join and I was really happy when she said to me she was going to sign for Wexford. I’m a huge fan of Emma and I will be long after I finish.”