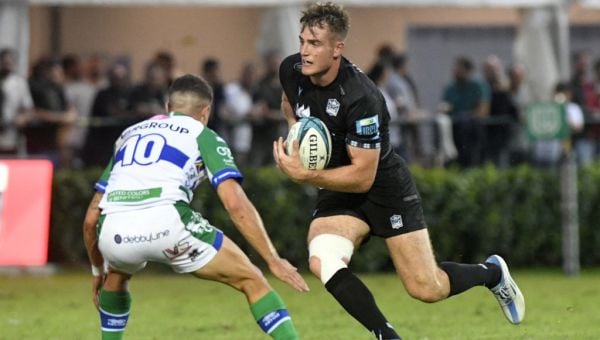 Glasgow’s rebuild under new head coach Franco Smith got off to a rocky start as they suffered a 33-11 defeat at Benetton in the opening match of the United Rugby Championship.

Former Italy boss Smith was appointed in the summer after the club parted company with Danny Wilson, who had overseen a five-match losing streak at the end of last season that culminated in a 76-14 defeat to Leinster in the URC quarter-finals.

Glasgow suffered an agonising 19-18 loss in Treviso last term but were comfortably second best this time around.

Edoardo Padovani and Gianmarco Lucchesi touched down as Benetton took a 13-6 lead into half-time, and the hosts pulled clear in the second period, with Ignacio Mendy going over twice and Rhyno Smith kicking 13 points in total.

Zander Fagerson came off the bench to score Glasgow’s only try on the hour, but they left Italy empty-handed ahead of their home opener against Cardiff next Friday.

Full-back Smith put the home side in front from the tee in the 13th minute.

George Horne levelled matters with a penalty soon after, but Padovani crossed for the first try of the season as the match entered the second quarter.

Lucchesi then touched down from a driving line-out in the 37th minute and, although Benetton failed to add the extras to either of their first-half touchdowns, they took a seven-point lead into the break, with Horne sending over a routine penalty for the Warriors in the final act of the opening period.

Benetton had their third try three minutes into the second half, when Mendy stepped off his wing and darted between two Glasgow defenders, with Smith nailing the conversion out wide.

Smith added a further three points to the home side’s tally and Glasgow were reprieved when Benetton had a potential bonus-point try ruled out for a knock-on.

The gap was 20 points when Smith added another penalty, but there was a glimmer of hope for Glasgow when Fagerson barged his way over on the hour.

Tom Jordan’s miss from the tee limited that breakthrough’s impact on the deficit and Mendy snatched the bonus point at the death, with Smith again on target with the conversion