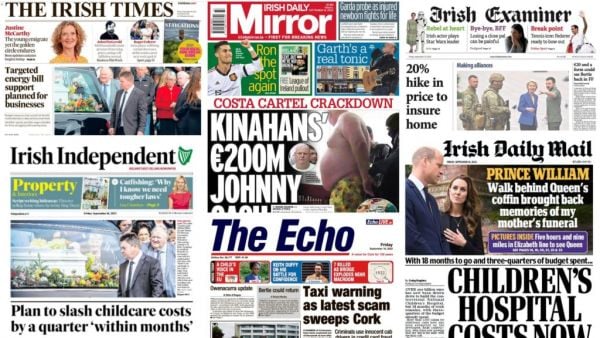 As the working week draws to a close the newspapers cover energy bill supports, the cost of the new children’s hospital and the dramatic arrest of a Kinahan associate on the Costa del Sol.

The Irish Times leads with the latest on the Government’s plans to support businesses with their energy costs. Ministers are considering how best to support firms facing soaring bills without giving millions of euro to companies that are not feeling pressure. 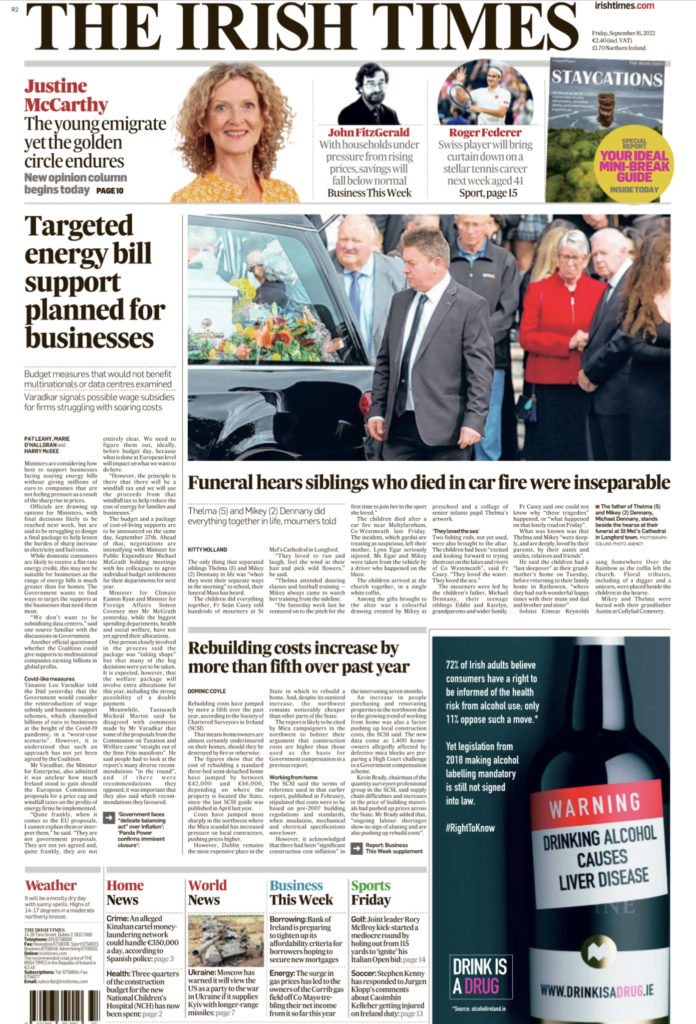 Homeowners are having to pay up to 20 per cent more to insure their properties as the cost of rebuilding homes has risen by more than €50,000 in the past year, the Irish Examiner reports. 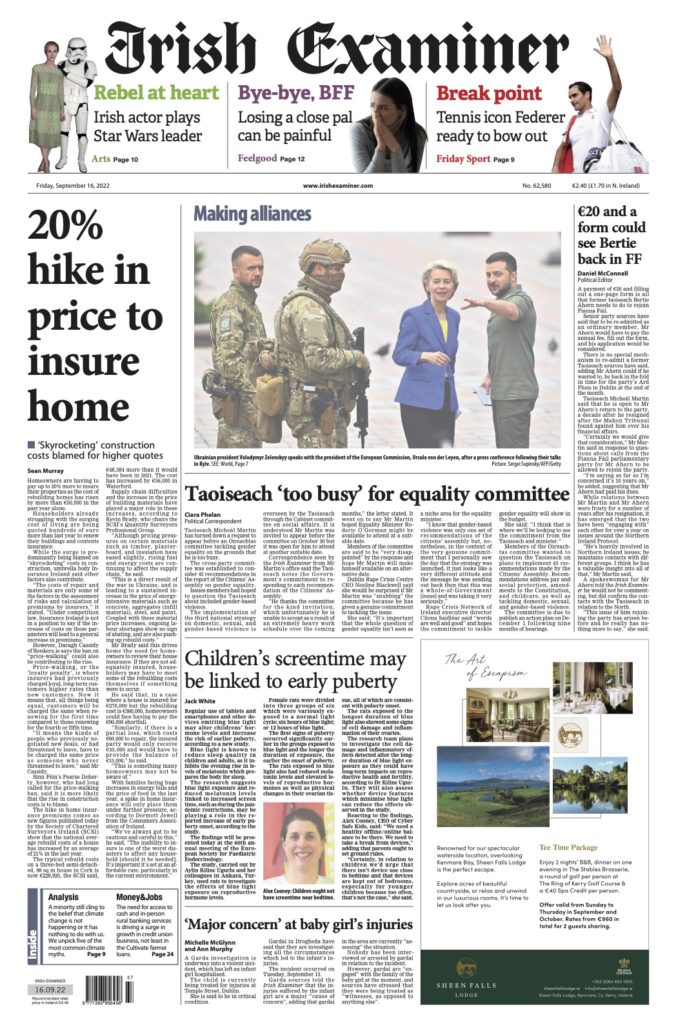 The Irish Independent reports that parents could receive a 25 per cent reduction in childcare bills “within months” as ministers enter the final stages of budget negotiations. 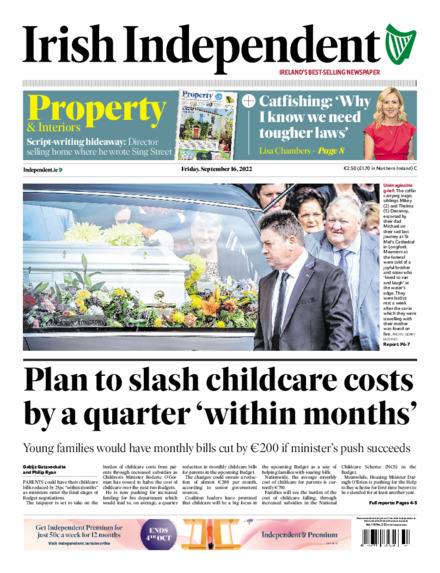 The Irish Daily Mail covers the ballooning cost of the new national children’s hospital in Dublin, with €1 billion already spent. 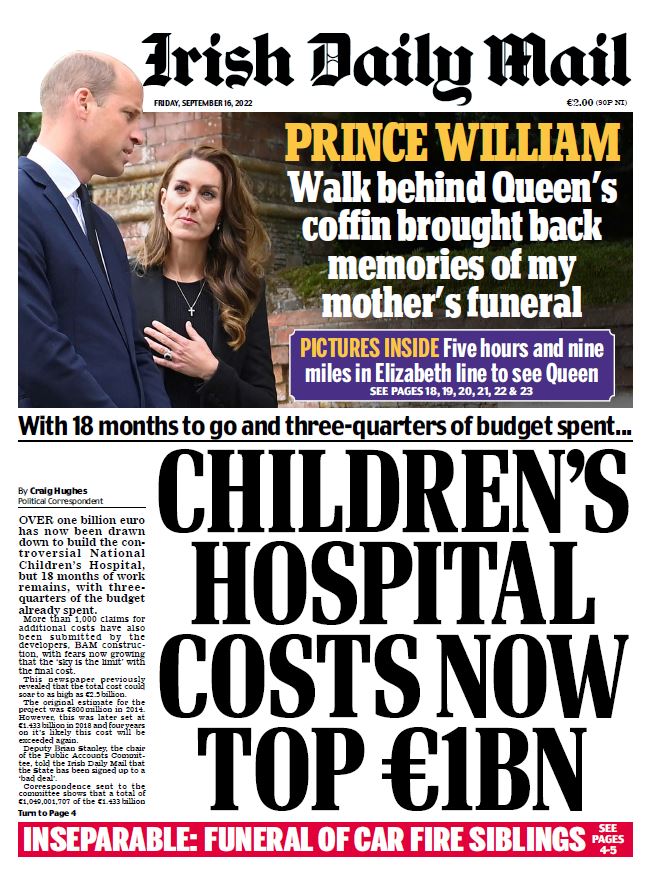 The arrest of Kinahan-associate Johnny Morrissey on money laundering charges makes the front of the Irish Daily Mirror. 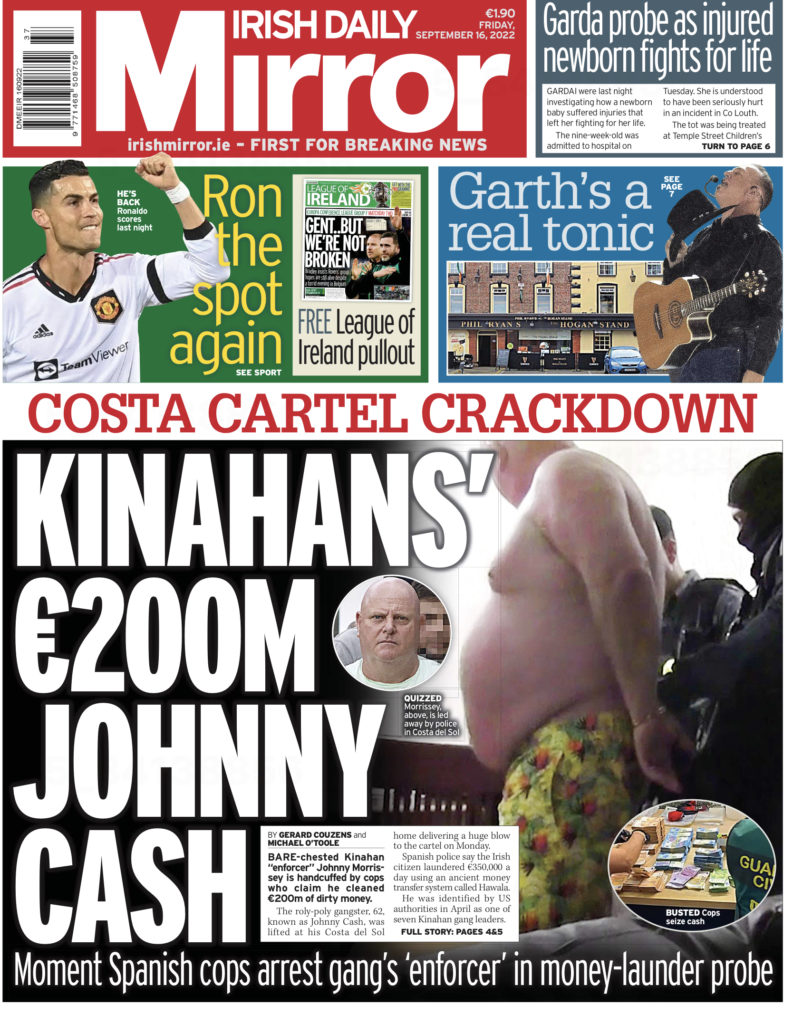 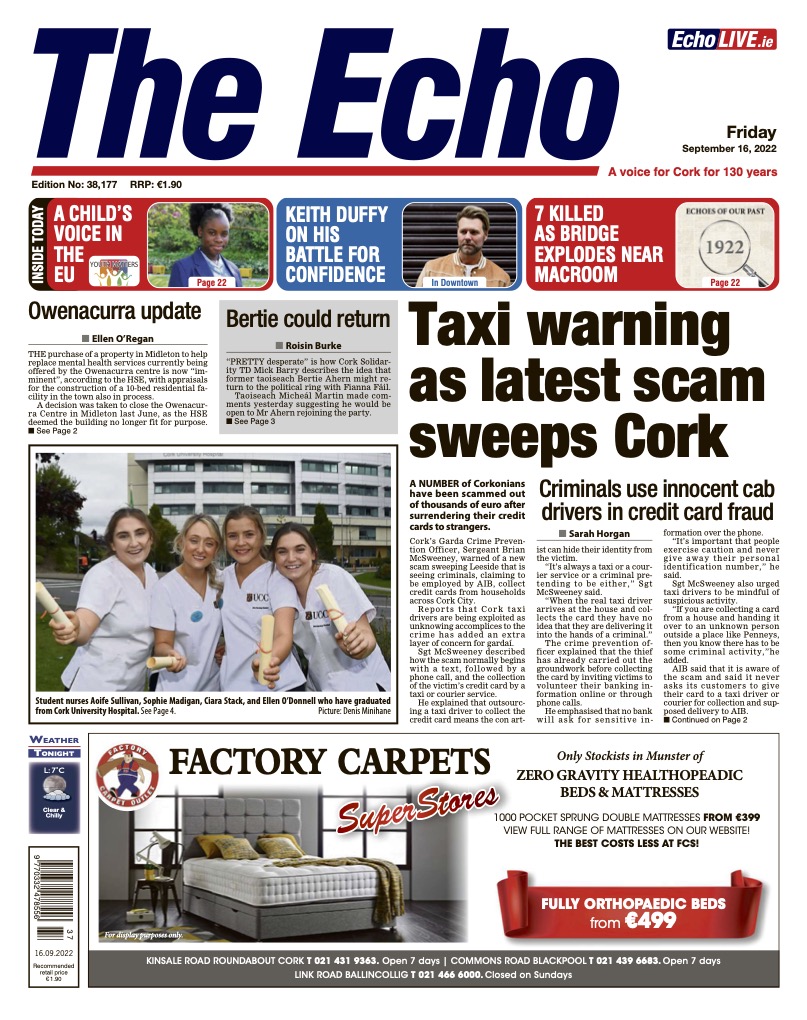 The Belfast Telegraph continues with its royal coverage ahead of Queen Elizabeth’s funeral on Monday. 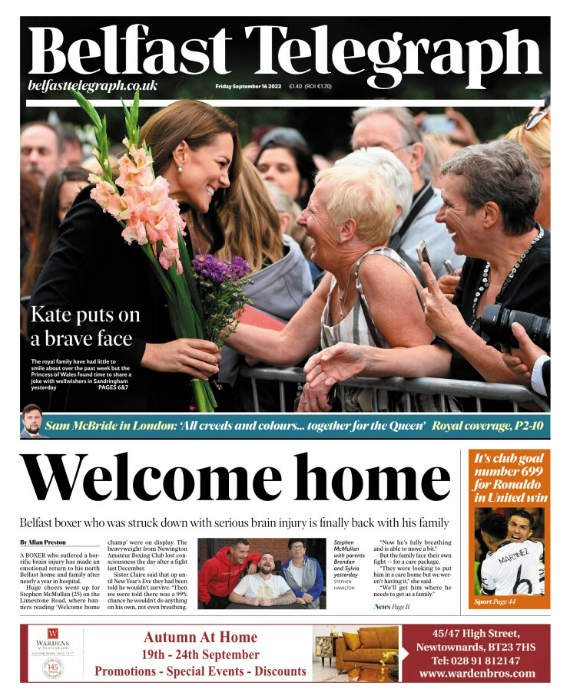 The British papers also continue to cover the lead up to the funeral.

The Daily Express, Metro and Daily Mail carry comments made by the Prince William to one mourner at Sandringham House in Norfolk, in which he said walking behind his grandmother’s coffin to the lying in state was difficult and reminded him of the funeral for his mother, Diana.

Prince William: ‘The Queen was like everyone’s grandmother’ #TomorrowsPapersToday pic.twitter.com/Q8JVXR7jfE

DON’T CRY…YOU’LL START ME OFF

Prince Harry will be allowed to wear his military uniform at the queen’s vigil, The Sun says.

On tomorrow’s front page: Prince Harry WILL be allowed to wear his military uniform at the Queen’s vigilhttps://t.co/AaEHjuElPM pic.twitter.com/F9IiQhzkkw

The Daily Telegraph adds the funeral procession will see doctors and nurses walking in front of the late British monarch’s coffin in a “fitting tribute to an extraordinary reign”.

‘NHS doctors and nurses to walk ahead of coffin’#TomorrowsPapersToday

Elsewhere, The Guardian reports that Liz Truss is to lift a ban on fracking despite a leaked UK government report suggesting little progress has been made in reducing and predicting the risk of earthquakes caused by the practice.

Energy firms have warned that the British government’s help is too late and will not cover soaring bills, according to i.

+ Funeral plans revealed as 100,000 see her lying in state#tomorrowspaperstoday pic.twitter.com/tGdnx2sc9Z

The Daily Mirror covers the funeral for nine-year-old Olivia Pratt-Korbel who was gunned down in her own home in Liverpool, writing that her mother vowed to “never to say goodbye in a moving eulogy”.

And “pray for the millionaire bankers,” says the Daily Star, in reference to the Chancellor’s plans to scrap the cap on bonuses.