‘The cost of living is rising, so are we’: Thousands attend protest in Cork 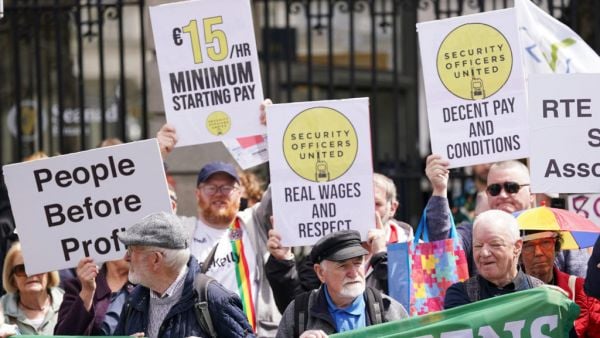 Thousands of people have attended a cost-of-living protest in Cork city, during which activists demanded further support from the Government to help people struggling with inflation.

Protesters chanted “the cost of living is rising, so are we” and held signs up with slogans like “Rent Control Now”.

A large crowd gathered outside Cork City Council’s offices, where a number of speakers addressed the protest.

Valerie Conlon, an ex-Debenhams worker, spoke about the €390 million in half-year profits announced by the ESB on Friday.

“Already the Government are trying to backtrack on that by saying they’ll give it back to us. They won’t,” she said.

Antoinette Burke of Families Unite for Services and Support (Fuss) described the expense in accessing services for her 15-year-old daughter, who has cerebral palsy.

“We are forced to start GoFundMes for things like basic surgeries, wheelchairs, specialist seating. Many of us receive no state support, all despite not being able to work,” she said.

“Given that so often the role of a carer is taken on by mothers, means testing payments against partners’ incomes not only tells us how the state values carers’ contributions to their community but leaves women utterly dependent and extremely vulnerable.”

The demonstration comes ahead of a cost-of-living protest to be held in Dublin next Saturday, before the budget is officially presented on Tuesday, September 27th.

The Government is due to announce a number of one-off cost-of-living measures alongside Budget 2023, including another electricity grant to be made available before Christmas.