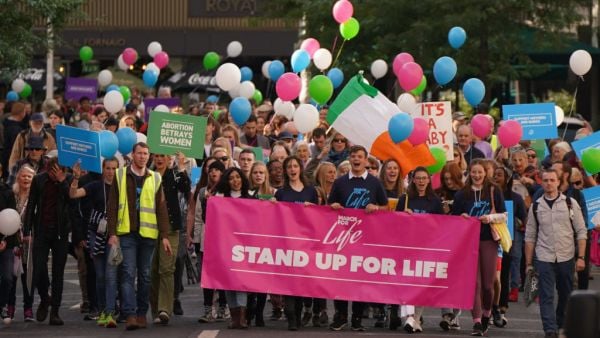 A large crowd gathered for an anti-abortion demonstration in Dublin city, which organisers said was to call for alternatives to abortion to be included in an ongoing review into Ireland’s new laws.

An independent review into termination of pregnancy services in Ireland is currently under way, three years since the liberalisation of strict abortion laws.

This gave women legal access to abortion during the first 12 weeks of pregnancy, and later in pregnancy in cases where the woman’s life is at risk, or in cases of fatal foetal abnormalities.

As part of the new laws, a review into termination of pregnancy services was due three years from their introduction.

The review is being led by independent chairwoman Dr Catherine Conlon.

Organisers said the March for Life demonstration was to call for “all perspectives” to be included in the review, and to increase support for women who have unplanned pregnancies.

People carried blue, pink, green and white balloons, and signs with slogans such as “abortion betrays women”, “abortion is murder”, and “support mothers and babies”.

Some of the signs referred to the US Supreme Court’s decision earlier this year to overturn the landmark Roe v Wade ruling, which removed the US constitutional right to abortion.

This was welcomed by anti-abortion groups, and prompted pro-choice activists in Ireland to hold demonstrations outside the US embassy in Dublin.

Saturday’s demonstration on Molesworth Street was organised by the Pro Life Campaign.