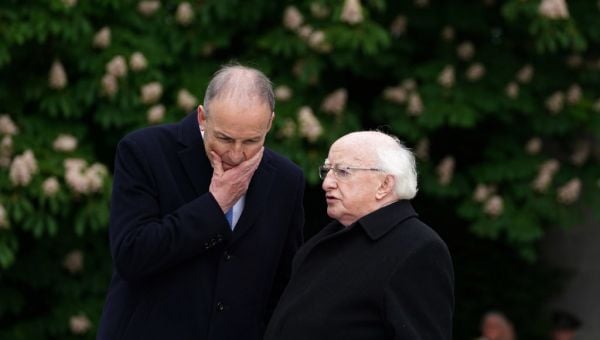 A reception at Buckingham Palace and an event hosted by the UK’s new foreign secretary are among the events President Michael D Higgins and Taoiseach Micheál Martin will attend around the state funeral of Britain’s Queen Elizabeth.

The historic funeral will be one of the rare occasions where both the President and Taoiseach are out of the country at the same time.

President Higgins and his wife Sabina, along with Mr Martin and his wife Mary, will be among the hundreds of foreign dignitaries attending the funeral at Westminster Abbey in London on Monday morning.

This afternoon President and Sabina Higgins attended a service of reflection for the life of Queen Elizabeth II at St Anne’s Cathedral in Belfast pic.twitter.com/Fw5mWZjqHQ

With most countries invited to send their head of state or head of government, along with their spouses, it is believed that Ireland’s four-strong delegation is unusual.

Mr Martin will also be one of several world leaders that will meet British prime minister Liz Truss ahead of the state funeral.

He was due to arrive in London on Sunday morning for a meeting with Ms Truss at 10 Downing Street.

Political issues are also likely to be discussed, although Downing Street has suggested any meetings between political leaders will be more of a chat than a bilateral session.

Good call with British PM @trussliz today.
Offered our sincere condolences to the British people on the loss of HM Queen Elizabeth. Agreed to keep in close contact in the weeks ahead.

Afterwards, Mr Martin and Mr Higgins will pay their respects at the queen’s coffin which is lying in state at Westminster Hall, and will also sign a book of condolence at Lancaster House.

Britain’s King Charles will host a reception for visiting heads of state at Buckingham Palace on Sunday evening, which the Martins and Higginses are expected to attend.

Following the funeral, British foreign secretary James Cleverly will host a reception for foreign dignitaries at Church House, next to the abbey.

The Taoiseach will fly out of London on Monday afternoon on the Government jet ahead of his trip to the UN General Assembly in New York.