CLOSELY fought wins for Mount Leinster Rangers and Rathvilly today in Netwatch Cullen Park completed the line up for the Football Championship semi-finals and it all leads to a very busy weekend next week when they games will be decided. 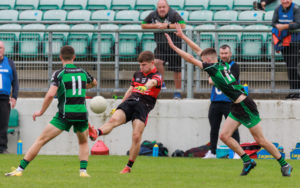 Venue to be confirmed

All matches are finish on the day, if level at full time extra time of 2×10 min halves to be played. If still level penalties as per rules sent out to be taken.

**Don’t miss The Nationalist, in shops on Tuesday morning, for the best coverage of all the weekend’s games and the previews of the upcoming games next week.