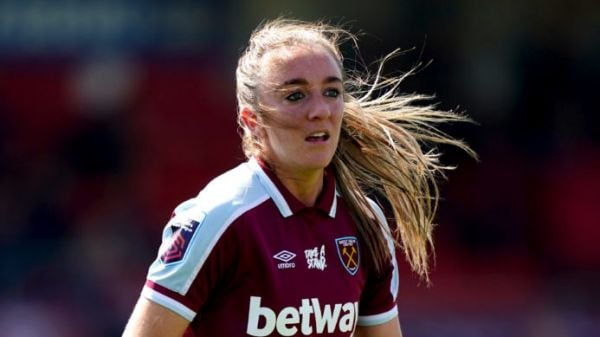 Lisa Evans helped West Ham off to a winning start in this season’s Women’s Super League with the only goal of the game as they overcame Everton 1-0.

Chances were at a premium at the Chigwell Construction Stadium on Sunday afternoon but Evans headed home on the stroke of half-time after Everton had only half-cleared a corner.

Everton forward Katja Snoeijs had a couple of opportunities after the interval but was denied by Mackenzie Arnold as the Hammers held on in Paul Konchesky’s first competitive match in charge of the club.

The former England full-back made 12 signings over the summer and handed debuts to defenders Kirsty Smith and Risa Shimizu, midfielder Jess Ziu and forward pair Honoka Hayashi and Viviane Asseyi.

The hosts started brightly but it was Lucy Graham who had the first real threat as the Toffees captain tested Arnold while at the other end Evans was thwarted from close range by Courtney Brosnan.

Hayashi watched her effort from distance fly over the crossbar but just as it seemed the sides would go in at the break all level, Evans capitalised after a scramble in the Everton box.

Brosnan could only punch the ball to the edge of the area, where Ziu sent a looping header back towards goal before Evans applied the finishing touch on the six-yard area.

Everton saw plenty of the ball after the interval as they pushed for an equaliser, with Snoeijs pressing Arnold into action twice but the Hammers goalkeeper kept out both shots.

In fact the only time the Australian came close to conceding was when Shimizu flicked past her towards the conclusion but West Ham were able to avert trouble as they comfortably clung on.

Everton therefore started their season with a loss under new manager Brian Sorensen, stretching their winless run in the WSL to eight matches after a forgettable end to the 2021-22 campaign.