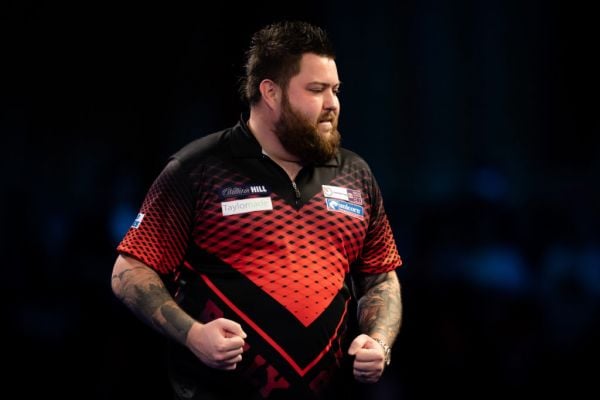 Michael Smith got the better of world champion Peter Wright to book his place in the last eight of the World Series of Darts Finals in Amsterdam, where top seed Dimitri van den Bergh crashed out.

Wright, who averaged almost 103 himself, missed doubles in three successive legs which proved costly as Smith opened up a 4-1 lead before closing out the win.

Michael Smith produces the performance of the tournament so far, averaging 107.40 and landing five 180s to set up a repeat of the 2018 final against James Wade!

Belgian Van den Bergh suffered an unexpected 6-2 loss to qualifier Ryan Joyce, who goes on to play Dirk van Duijvenbode after the Dutchman came back from 3-2 down to reel off four straight legs and defeat Gary Anderson.

Home favourite Michael van Gerwen is also through after delighting the partisan Amsterdam crowd as he beat Australian Damon Heta 6-4.

World number one Gerwyn Price was pushed to a deciding leg by Canadian Matt Campbell and goes on to play Joe Cullen in the quarter-finals, after the Masters champion edged to a 6-5 win over Dave Chisnall, who missed eight match darts.

James Wade, the 2018 champion, beat America’s Leonard Gates 6-4, and meets Smith for a place in the semi-finals.

In the final match of the evening, reigning champion Jonny Clayton averaged just over 104 in a 6-2 win against Dutchman Danny Noppert.

The quarter-finals will take place in the afternoon session on Finals Day, with the tournament played to a conclusion during the evening.