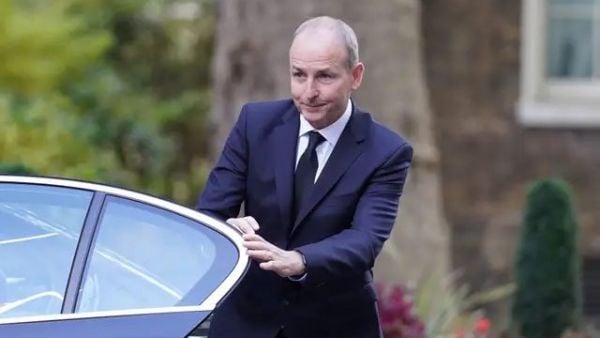 Taoiseach Micheál Martin has said Queen Elizabeth’s legacy is a reminder of the importance to “nurture” British-Irish relations, as he praised the late monarch’s “authentic actions” towards reconciliation.

The Taoiseach was speaking from London ahead of the state funeral on Monday morning.

Mr Martin and his wife Mary, along with President Michael D Higgins and his wife Sabina, will be among the 500 foreign dignitaries attending the funeral at Westminster Abbey.

The two couples attended Westminster Hall on Sunday afternoon, before signing a book of condolence at Lancaster House.

The Irish delegation was also due to attend a reception hosted by the King at Buckingham Palace on Sunday evening for visiting heads of state.

Speaking to reporters in London, Mr Martin said it was a “very significant moment in history”, adding: “Her warmth, her authentic actions, and by actions and by what she did, she made an enormous contribution.”

He said the queen’s 2011 visit to Ireland was the culmination of “enormous work” that “cemented” reconciled Anglo-Irish relations in the modern era, and would long be remembered.

“In many ways it gives us all time to pause and reflect on the importance of the British-Irish relationship, the need to cultivate it, to nurture it, for the future generations.”

Today, I signed the Book of Condolence at Lancaster House.
In sympathy with King Charles, the Royal Family, and British people, on the passing of HM Queen Elizabeth, who did so much for reconciliation on these islands. pic.twitter.com/1EYwMQ8FPN

Addressing Irish people living in Britain who mourn the queen’s death, as well as the unionist community, he said: “We sympathise with you, we offer you our deepest sympathies upon your loss.

“And there is a deep sense of loss on parts of the island of Ireland, particularly in the unionist and loyalist community, as a result of the passing of Queen Elizabeth. I recognise that.”

Speaking about the queue of people paying their respects at the queen’s coffin, which has been lying in state at Westminster Hall, Mr Martin said it was “incredible”.

“It’s very moving, and I think it brings to mind in many respects the attachment, the connection between the British people of different generations and Queen Elizabeth.

“It’s quite an extraordinary thing to see at first hand, and we need to appreciate that in Ireland. There is a deep connection there.”

Asked about the number of foreign dignitaries attending the funeral, Mr Martin added: “It reflects an admiration for a person who, if I use the phrase ‘did the fundamentals well’, who did service well, who did duty well.

“And in many ways did it in an non-ostentatious way. And that hard work ethic resonated across the world. So it really illustrates the depth of respect that people across the world had for Queen Elizabeth.”

Mr Martin said he had had a “warm” meeting with British prime minister Liz Truss, but refrained from answering questions on the Northern Ireland Protocol.

He left 10 Downing Street just under an hour after arriving to meet Ms Truss on Sunday morning, in what was expected to be more of an informal chat than a traditional bilateral meeting.

Britain is expected to push ahead with legislation to give its ministers the power to scrap parts of the protocol, which was agreed by the UK and EU to avoid a hard border on the island of Ireland.

Diplomatic efforts are expected to be ramped up in the coming weeks to find a resolution.

“I don’t think this is the time, if you don’t mind me saying so, to get into the detail about issues like the protocol,” Mr Martin said during an interview on BBC Radio 4, adding that he respects the UK’s period of mourning.

He continued: “I’ve had a good telephone conversation last week with the British prime minister, had an initial warm meeting this morning where we discussed many issues in the context of the British-Irish relationship.

“But I do think the opportunity is there for us to reset relationships and to be conscious of what we achieved in previous years, the obstacles that were overcome then.

“And that gives us the strength to know that we have the capacity to overcome current obstacles, current issues that potentially could impede the relationship, and I believe we can overcome them.”