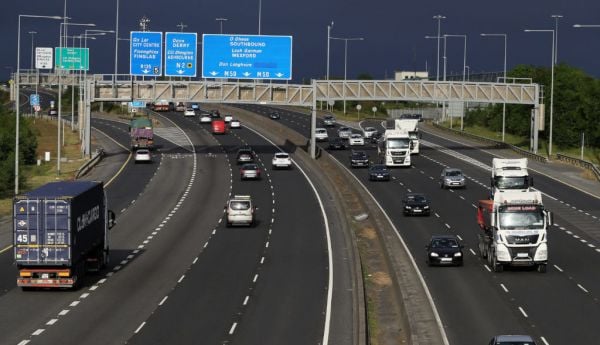 A judge has given seven motorists fines totalling €105,000 after they ignored court prosecutions and thousands of warning letters over unpaid M50 tolls.

However, they did not attend their hearings, which went ahead in their absence, and Judge Anthony Halpin handed out fines of €15,000 in each case. He also ordered the motorists, five males and two females, to pay €350 in prosecution costs.

Each driver was a regular private car owner, with five sample counts for unpaid tolls in January and February this year.

Judge Halpin noted the types of vehicles, their records of outstanding charges and that most of them made no effort to pay.

TII mailed hundreds of warning letters to most defendants before bringing the court prosecutions, which can carry a potential custodial sentence.

Judge Halpin noted the lack of engagement with the motorway authority.

TII had sent one driver 750 letters over 280 outstanding tolls, the highest amount in Monday’s proceedings.

In advance of the court hearing, it obtained certificates detailing the registered owners of the vehicles as well as the images of them passing the toll gantry on the M50 on specific dates.

Prosecuting counsel Thomas Rice BL, instructed by Pierse Fitzgibbon Solicitor, said the defendants were not in court, but Judge Halpin consented to his application to proceed in their absence.

Counsel called on a TII witness to confirm each vehicle’s ownership records, the number of passages and relevant response and payment history.

The judge heard that most did not engage with the transport agency.

The court can impose fines of up to €5,000 per charge and a six-month sentence.

The judge has also heard that it was the practice of the motorway authority to select habitual non-payers to face criminal proceedings.

At the time of the offences, the standard M50 toll for a private car was €3.20, which had to be paid before 8pm the following day or face a €3 penalty for missing the deadline.

Motorists had 14 days to pay for the journey and the initial penalty or face a more significant penalty. After 56 days comes an additional charge; if it remained unpaid, warning letters and court proceedings followed.

Commercial and goods vehicle owners pay higher tolls. The registered vehicle owner is liable even if they were not driving.