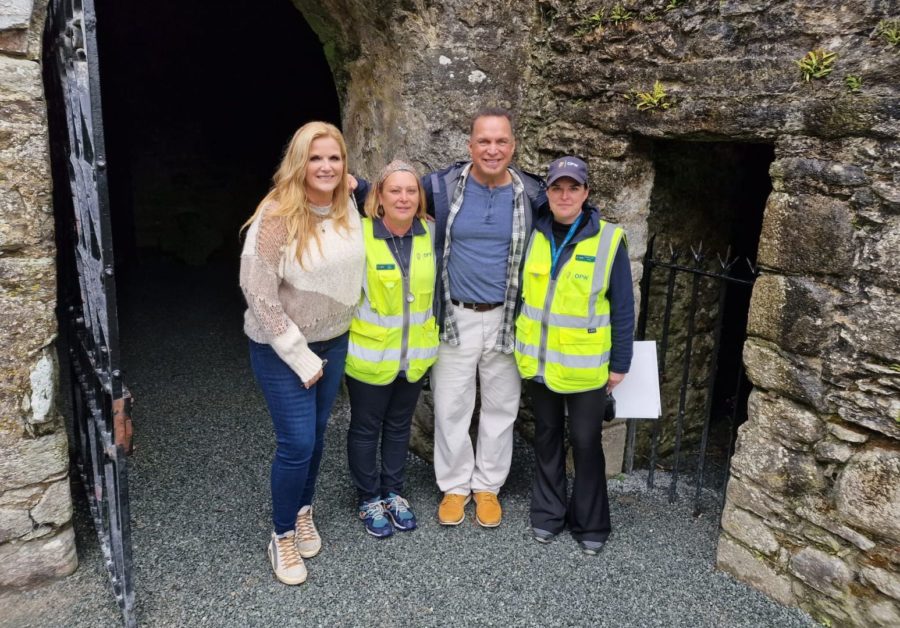 IT’S not every day that you are told Garth Brooks is coming to your workplace, but that was the reality for two Carlow sisters last week.
Emma Jane King and Lisa Doyle, originally from Tullow, were tasked with giving the country superstar and his wife Trisha Yearwood a tour of the beautiful and historic Glendalough last week.

Emma Jane and Lisa both work as guides with the Office of Public Works (OPW) in Glendalough visitor centre.

It was a typical Monday when they got a call to facilitate two special visitors.

Emma Jane recounted: “We were told who it was … I thought it was hoax, one of my workmates playing a trick. Then the security guys arrived and, no, he was actually coming.”

Garth and Trisha were blown away by the monastic site on their tour.

“He was absolutely in awe of the buildings, the beautiful cathedral, St Kevin’s church. When he’d go into the buildings, he touch the stones and his breath was taken away. You could see it in their faces.”

Gareth and Trisha had time for everyone they met in Glendalough, stopping to say hello and take a quick selfie.

“They were so genuine. They were a lovely couple.”

Garth even met couples from London and the US at Glendalough who had come over to Ireland for his concert.

“I think he was in awe he was meeting people here that had come over for his concert.”

At the end of the tour, Emma Jane asked Garth for a photo for her parents Lily and Paddy, who live on the Tullow Road and who recently celebrated their 56th wedding anniversary. What he did next was simply class. “He took my phone in his hand. Both of them did a video, said hello to my parents, wished them a happy anniversary and said they had two very beautiful girls who gave us a wonderful tour.”

The OPW in Glendalough is well used to dealing with dignitaries and high-profile visits, as with Prince Charles and Michelle Obama in recent years. Emma Jane and Lisa are proud Carlovians and take every opportunity to recommend the county to visitors.