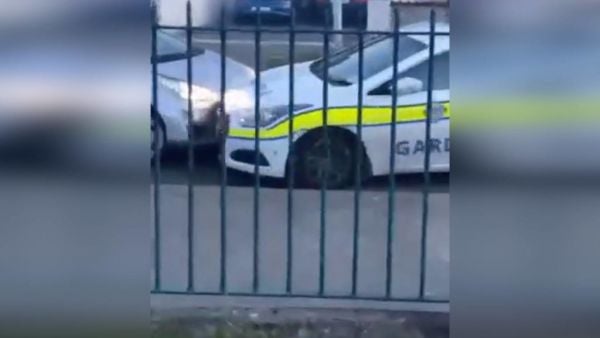 Gardaí have a short list of suspects following an incident in Cherry Orchard, west Dublin, on Monday that saw a garda car rammed by another vehicle.

Garda Commissioner Drew Harris has called the incident “disgraceful” and said a full investigation is under way.

A clip of the incident, which was widely shared on social media and messaging apps, was taken in the Cherry Orchard suburb in west Dublin.

The incident took place at 7.30pm on Monday evening.

Gardaí said they were responding to reports of dangerous driving in the area when they witnessed two vehicles being driven erratically and which later failed to stop when asked to do so.

Investigators believe the incident was an act of “retaliation” for Garda operations against a gang behind so-called joyriding in the area, the Irish Examiner reports.

Gardaí previously arrested seven suspected members of a group behind the problem, and brought charges. The individuals were granted bail and subject to curfews.

Three of the seven have since been placed in custody, after they broke bail conditions.

“A few of them regrouped and Monday was retaliation,” said one Garda source.

Speaking to the media on Tuesday, Commissioner Harris said the incident was “disgraceful and, indeed, very concerning”.

He added: “I’m glad to report that the two Garda members in the vehicle were uninjured and then were able to summon assistance which quickly arrived to help them to restore order.”

“There’s been vigorous policing operations in that area over the last number of weeks,” Commissioner Harris said, adding that vehicles had been seized and arrests had been made.

“There’s a full investigation now under way, but also then we have to look to tonight and subsequent nights.”