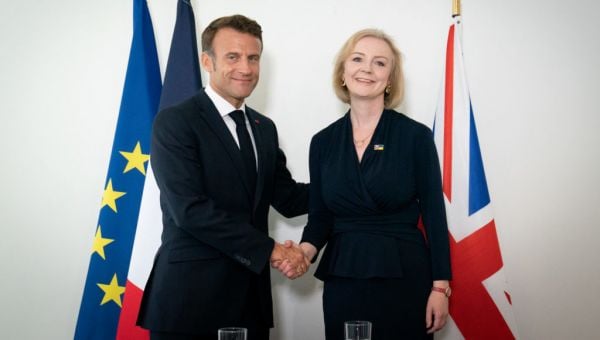 Liz Truss did not discuss issues with the Northern Ireland Protocol or unauthorised migrant crossings of the Channel during her meeting with French president Emmanuel Macron.

The British prime minister had a “constructive” conversation lasting around half-an-hour, Downing Street said, but it focused on energy security rather than the two major points of contention.

The pair held their first bilateral meeting at the fringes of the United Nations summit in New York after Ms Truss caused controversy by failing to say whether the ally was “friend or foe”.

Mr Macron reportedly welcomed their conversations on Ukraine and other European issues, saying: “I now believe in proof, in results.

“There is a will to re-engage, to move on and to show that we are allies and friends in a complex world.”

Ms Truss’ official spokesman confirmed they did not discuss the post-Brexit agreement on Northern Ireland or migrant crossings in small boats, which have not abated.

He said the UK government intends to resolve protocol issues with the EU, adding: “This is not an issue that necessarily we believe can be solved through one single EU country.”

But the spokesman would not say whether she will raise the protocol with European Commission president Ursula von der Leyen on Wednesday.

The White House has said that Joe Biden will raise it in his meeting with Ms Truss.

National security adviser Jake Sullivan said the US president will “encourage the UK and the European Union to work out a practical outcome that ensures there is no threat to the fundamental principles of the Good Friday agreement”.

Ahead of her meeting with Mr Macron, Ms Truss had stressed that tackling migrant crossings in small boats was one of the issues the two nations must work together on.

Provisional figures suggest more than 29,700 people have made the perilous journey this year – exceeding last year’s total of 28,526.

“That is one of the issues that we need to work with France in a constructive way on,” Ms Truss told reporters.

However, the prime minister’s official spokesman said that the stalled Rwanda policy is the “long term solution” to crossings after confirming the pair did not discuss the issue.

Ahead of the meeting, Ms Truss sought to strike a conciliatory tone, stressing the need to work together on small boats and against Vladimir Putin’s war in Ukraine.

She had sparked a diplomatic row during the Tory leadership contest when she declined to give a clear answer when asked if the president of the allied nation was a “friend or foe”.

Instead, the then-foreign secretary said last month that the “jury’s out”.

One thing Mr Macron did raise, according to No 10, was his idea of forming a European Political Community to include non-EU states such as the UK.

He did not invite Britain to a meeting about the grouping to be held in Prague in October, the spokesman said.