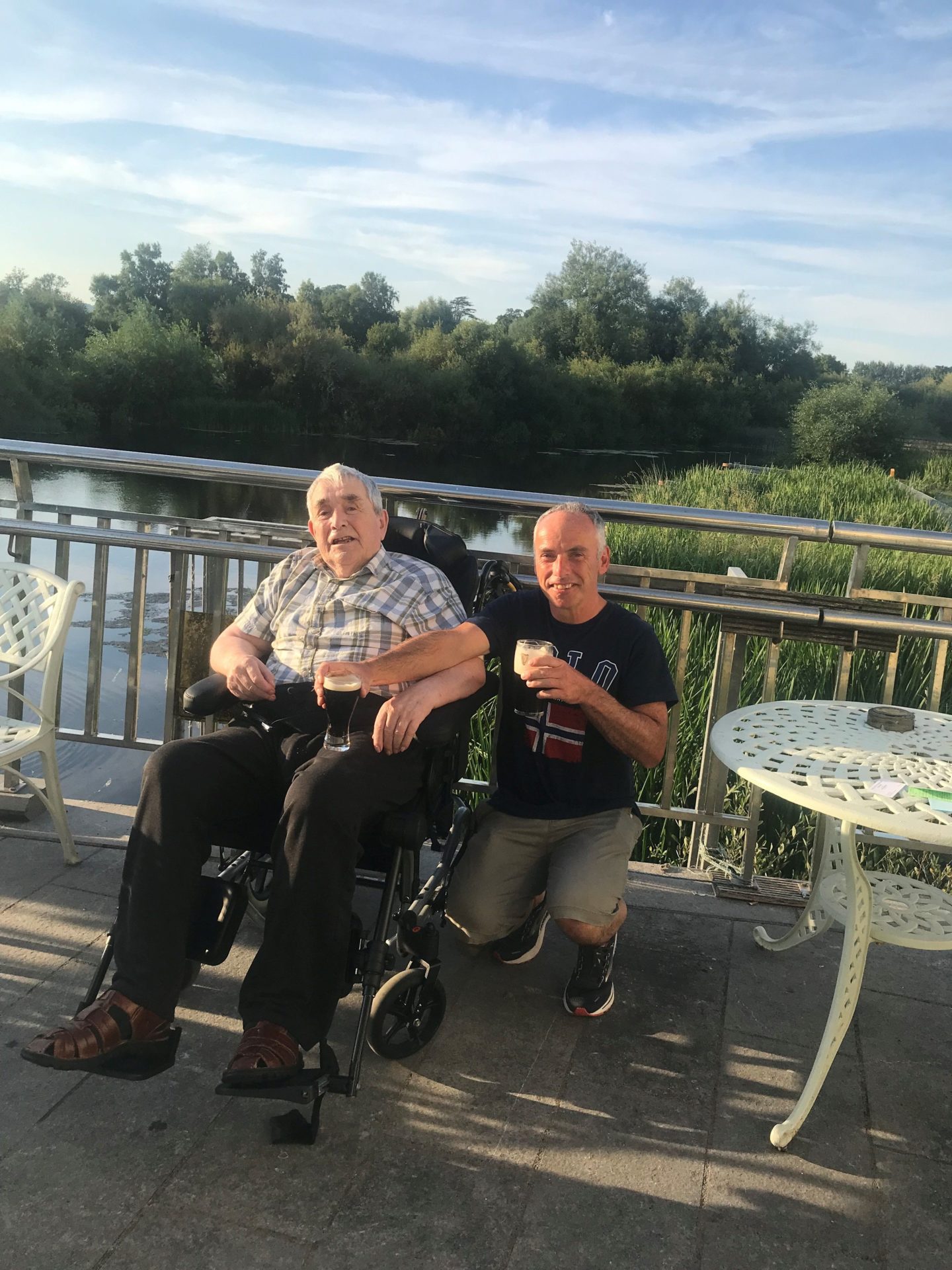 Barry Cantwell with his dad Pat. Barry will run the Dublin and London city marathons in aid of the Alzheimer’s Society of Ireland and Bethany House, who have supported the family through Pat’s diagnosis

THE son of a well-known businessman is about to run both Dublin and London city marathons in a bid to raise €20,000 for the Alzheimer’ Society of Ireland.

Barry Cantwell from Carlow knows only too well the massive changes that a diagnosis of Alzheimer’s has on a family. His father Pat has been living with the condition for the past eight years and now Barry wants to raise awareness about it while also raising funds for care providers locally.

The Alzheimer’s Society works across the country in the heart of local communities providing dementia specific services and supports and advocating for the rights and needs of all people living with dementia and their carers.

“Unfortunately, an Alzheimer’s diagnosis only goes in one direction,” said Barry.

Pat, who will soon be 80-years-old, ran Ard Rí dry cleaners on Staplestown Road, Carlow for years and was a hugely popular and well-known businessman. Sadly, about eight years ago, Pat was diagnosed with having the condition which has had an effect on his whole family. He used to attend day services in Bethany House, Carlow for respite and is now living in Beechwood Nursing Home, Leighlinbridge.

The Cantwell family are well-known in Carlow town. Pat’s wife Mary has been a ladies’ captain at Carlow Golf Club, while Pat himself was very involved with Carlow Camera club, Carlow Active Retirement and loved to attend Mass at the Capuchin Friary on Dublin Street.

Barry is known through his work as a coach with Askea juveniles and is a committee member of the club. He’s been focusing on his own training ahead of taking part in the London marathon on 2 October and the Dublin City Marathon on 30 October. His coach is Frances Brennan from Hacketstown, who’s been putting him through his paces.

“My dad will be 80 on his next birthday and I’ll be 50 next week, so I thought that I’d get fit and healthy, do the marathons and celebrate my birthday afterwards,” said Barry.

He already has one marathon under his belt, having ran the Dublin marathon back in 2018, which he ran in aid of the Alzheimer’s Society. Barry works for Zurich Ireland, which match-funded the amount he raised four years ago, bringing the total to €11,590.

They’ve pledged again to double the money this year.

Barry wants to raise €20,000 this time and, as he’s already raised over €7,200 on his IDonate page yesterday (Monday), it looks like that goal is achievable.

The money raised will be split between the Alzheimer’s Society of Ireland and Bethany House as Barry is keen to give something back in gratitude for the great care his father receives there. He also wants to raise awareness of the condition and is grateful that his beloved father is so well cared for in Beechwood Nursing Home.

“Dad is very comfortable in Beechwood and is in great form. I think that’s down to the care that he gets there. He’s happy and content and that’s down to his carers. We’re so grateful for that,” said Barry.

Barry is also grateful to everyone who has donated to his fundraiser, no matter how big or small the amount is.

“Any amount you can afford to contribute will make a difference to our final total and this will be matched by Zurich foundation so thank you in advance for all donations!” continued Barry.

To donate online go to https://www.idonate.ie/crowdfunding/BarryCantwell