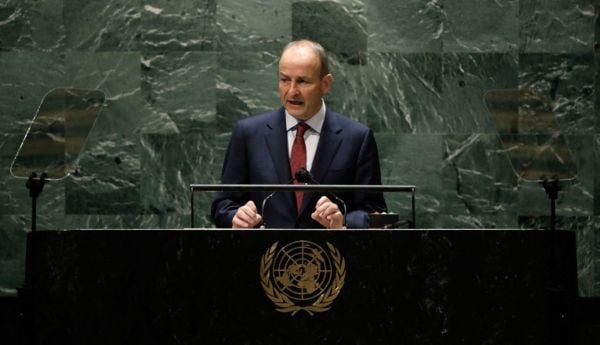 The meeting in New York has been overshadowed by Russia’s invasion of Ukraine and food shortages in Africa.

After attending the ploughing championships in Co Laois on Wednesday morning, Mr Martin will board a flight to New York where leaders from across the world have gathered for the UN General Assembly.

Many have flown directly from London after attending the funeral of Britain’s Queen Elizabeth.

US president Joe Biden delayed his attendance until Wednesday to pay respect to the monarch and will be one of two main speakers on what is day two of the summit.

The other is a pre-recorded message to be delivered by Ukraine’s president Volodomyr Zelenskiy.

Tensions between the West and Russia will overshadow much of the summit.

On Thursday Minister for Foreign Affairs Simon Coveney will attend a meeting of the UN Security Council which is expected to focus on accountability.

Countries from Africa and the global south will use their platform to highlight the food crisis which is gripping 828 million people.