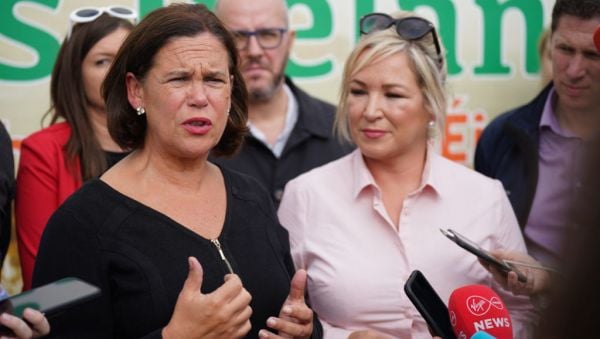 There is a window of opportunity to resurrect the Stormont Assembly, Michelle O’Neill has said.

The power-sharing government in Northern Ireland has been in flux since February as the DUP takes protest action against the Brexit Protocol.

Jeffrey Donaldson’s party is demanding action from the UK government before it will nominate new ministers to a fully functioning Executive.

UK Prime Minister Liz Truss is pushing ahead with the Northern Ireland Protocol Bill, which will suspend elements of the post-Brexit trade arrangements.

The protocol was among topics talked about by Ms Truss and European Union chief Ursula von der Leyen in New York on Wednesday, which has been described as a “good discussion”.

Sinn Féin has insisted that the protocol is “here to stay”.

Party president Mary-Lou McDonald said there is “no alternative” to the protocol, adding “a lot of this is also about people holding their nerve”.

“We really hope that Liz Truss, as the incoming Prime Minister, will depart from the antics of her predecessor, Boris Johnson, who really played games with the protocol and with Irish unionism, almost a game of make believe that somehow you could wish change away when in fact you can’t,” she said.

Stormont leader Michelle O’Neill said she has sensed that there is a “window of opportunity”.

“I genuinely believe that people want to take that and find an agreed way forward,” she said.

“The protocol is here to stay, make it work within the framework of the protocol, ironed out the kinks but make it work and then let’s get back and around the Executive table and actually supporting people.”

Ms O’Neill also said when she spoke with the new Secretary of State Chris Heaton-Harris, she “made it very clear to them that they need to stop the nonsense, stop pandering to the DUP, encourage them to get around the Executive table”.