ED Byrne has been named among the replacements for Leinster as they take on Benetton Rugby tomorrow evening in the RDS Arena in the BKT United Rugby Championship. (KO: 7.35pm – live on TG4, Premier Sports and URC TV). 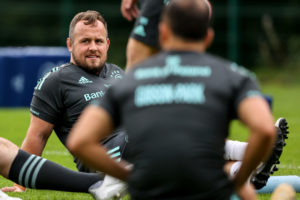 Byrne played 53 minutes of last week’s win over Zebre in Parma but Andrew Porter comes in to replace him in one of two changes in the front row, with Dan Sheehan getting the nod over Ronan Kelleher.

Those two changes are among a number of changes to the 23 that accounted for Zebre Parma the road with Leo Cullen able to call on a number of the Irish players that won a first ever series in New Zealand during the summer.

Garry Ringrose is also back to the starting XV and will captain the side. He will be partnered in the centre by Robbie Henshaw.

Elsewhere in the backs Jimmy O’Brien, Jordan Larmour and Dave Kearney are the back three selected by Cullen, with Luke McGrath and Ciarán Frawley in the half backs.

To the pack, James Ryan partners South African lock Jason Jenkins for the first time behind the front row.

On the bench alongside Byrne, Cian Healy is in line to win his 250th cap if introduced.

The game will also host a number of activities for Season Ticket Holders and supporters, with Leinster Rugby confirming that season pack collections will be available from 5pm at the Industries Hall.

Tickets for the game are still on sale at leinsterrugby.ie.