Joint-captain, alongside Rachel Sawyer she was all smiles when she was presented with the Player of the Match award. Astutely, she put that trophy into the safe hands of an Old Leighlin mentor as she went forward to lift the cup.

“Absolutely delighted. Especially after the disappointment of last year. It is brilliant for the club. We really wanted it this year. Our boots were burning and we were ready to go,” she confirmed. 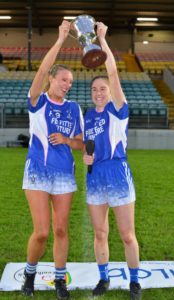 She said every player was hurting after losing their title last season.

“We had a plan. We stuck to it and everyone did their job. Our aim was to win this year and get our county title back. Leinster is wide open and I am sure, our manager, Con (Brennan) will want to see how far we can get.

Keeva Collins was winning her third senior medal. She didn’t mind admitting the game was not the spectacle which many thought would be the case.

“Any win is a good win. We will take it. We knew we didn’t play to our potential in the first half but we were still ahead. We stuck to our game plan, listened to our coach and did what they told us to do. Luckily it paid off for us in the end.”

The memory of last year was also in her mind.

“Once we win, I don’t mind. They all mean so much but this one is quite sweet because last year we didn’t play like we should have. We needed to get revenge and bring the cup back home to where it belongs.”

Niamh Forde comes from a GAA mad family. Last year it would have been a quiet household when Old Leighlin lost their hopes of four-in-a-row titles. This year the mood will be celebratory.

“It really means so much for us. There are six of us in the house. My brothers play. My parents are on the committee and my sister, Maggie, is on the team as well. It means so much to the whole family when we are in a final,” Niamh confirmed.

“After losing last year and fourteen of us losing two county finals (camogie and football), to keep back up and come back again, I am so proud of all those girls. It is tough going to get going again. We really wanted it this year and I think that is why we won,” she confirmed.

Winning at Netwatch Cullen Park, the home of Carlow GAA made this victory all the sweeter.

“It is so good to play here. I was here yesterday for the senior B and intermediate finals and they were two cracking matches. It really showed the work that is being put in to Carlow ladies football. It is showing on the county team as well. There are a serious squad of players there and hopefully they can build off days like this,” said Niamh. 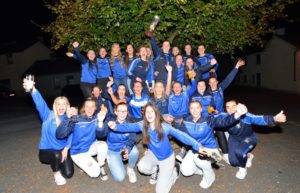