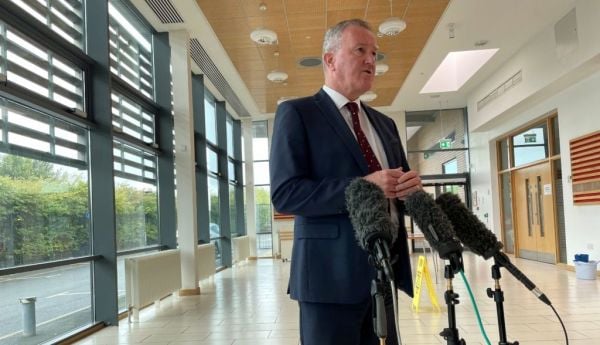 The Sinn Féin minister, who wrote to the British finance ministry earlier this week seeking targeted support for vulnerable people, said the measures announced by finance minister Kwasi Kwarteng would do nothing to help struggling families or businesses in the North.

Income tax and the stamp duty on home purchases will be cut and planned rises in business taxes have been scrapped, as Mr Kwarteng said a major change of direction was needed to kickstart economic growth in the UK.

After the delivery of the mini-budget, Mr Murphy had a conversation with the chief secretary to the Treasury Chris Philp, where he outlined his concerns over the fiscal package and announcements earlier this week of assistance with energy bills.

Finance Minister @conormurphysf has said that the Chancellor’s statement today delivers for the wealthy rather than ordinary workers, families and small businesses. https://t.co/wqdW3DDk93

Mr Murphy said: “A number of days back myself and the Scottish finance minister and the Welsh finance minister wrote to Treasury in advance of today’s fiscal announcement to suggest that we wanted to see targeted support for vulnerable people.

“I had the opportunity this morning to speak to the chief secretary to the Treasury, so naturally I outlined my complete disappointment at all of those issues remaining unaddressed.

“I also had a very pointed conversation with him in relation to the £100 per household scheme for oil here and the complete and utter inadequacy of that.

“The announcements today do not provide the levels of support for working families, for people who are facing real challenges in the middle of a cost-of-living crisis.

💬 Chief Executive Ann McGregor has commented on the #MiniBudget, saying: “Moves to target certain business costs, including reversing plans to increase corporation tax and national insurance are welcome interventions at a time of critical need….”https://t.co/9AXzS39OUu pic.twitter.com/Phm4xsWh02

“The measures provide tax breaks for the super wealthy and little else for anyone else in this crisis.

“For that to be presented as some sort of intervention which will assist people who are facing a real crisis, whether in homes or businesses, I think is absolutely ludicrous and I think people will really struggle in the time ahead.”

Asked what he thought about 40 investment zones being created, with tax breaks for businesses, Mr Murphy said: “It is a distraction announcement in the middle of a Thatcherite-on-steroids budget announcement.”

DUP East Antrim MP Sammy Wilson said some measures in the statement were welcome but expressed disappointment that there was no help for working families by increasing the tax-free childcare scheme.

Mr Wilson said: “I am disappointed that the tax-free childcare allowance has not increased from its current 20 per cent.

“The measures announced by the Chancellor this morning might be welcome for some, but only tinker
around the edges of the support really required by hospitality businesses here” Colin Neill pic.twitter.com/AU1Xgrn1ZR

“I note the chancellor’s response however, to my question, where he committed that his ministerial colleagues are looking at the matter. Childcare is an enormous cost for working families.

“This was a missed opportunity to increase the tax-free allowance which would release parents into the workplace and help childcare providers.”

Business groups in the North said they needed to see more detail on what was being proposed.

Ann McGregor, chief executive of the Northern Ireland Chamber of Commerce and Industry said: “Businesses will welcome the chancellor’s pledge to focus on economic growth.

“Inevitably, the devil will be in the detail of these proposals, but they must strike the right balance between tackling immediate pressures, driving reform and providing for a sustainable future.

“This is the Tory party acting as they have always done, making sure that their wealthy backers and big businesses are well looked after, without a thought for the rest of us.” @columeastwood https://t.co/IB7p6JR1OL

“Moves to target certain business costs, including reversing plans to increase corporation tax and national insurance are welcome interventions at a time of critical need.”

Chief executive of Hospitality Ulster, Colin Neill, said: “The measures announced by the chancellor might be welcome for some, but only tinker around the edges of the support really required by hospitality businesses here.

“Major financial assistance to cut the pressures caused by the high rate of VAT and a business rates holidays are urgently required.

“Again, it was extremely disappointing that the chancellor did not see fit to make these critical changes in his statement today.”

SDLP leader Colum Eastwood said: “Rather than attempting to help the millions of people across these islands who are mired in a cost-of-living emergency, what we got from the British government today was a budget by millionaires for millionaires.”

He said: “While it may address the energy crisis and help reduce inflation, albeit in the short term, it does create the risk of not delivering the growth the economy needs.

“The amount of debt that our nation will accrue will be a challenge for many decades to come, particularly if the huge gamble by the prime minister and chancellor doesn’t succeed.”