AS champions New Oak were getting shocked by Vale Wanderers last Wednesday night at the Superbowl, 13km up the road at the Seven Oaks Hotel, two special men were being honoured for their lifetime’s contribution to soccer in Carlow. Tom Hennessey and Gabriel Deering were presented with special FAI Centenary medals by FAI President Gerry McAnaney to honour the work they have done within Carlow soccer for the last number of years. 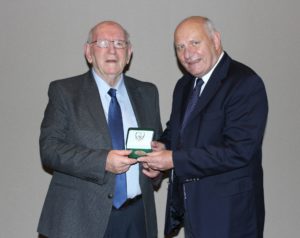 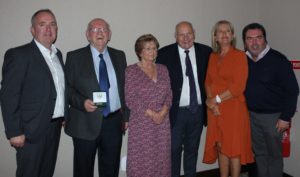 Tom Hennessy with members of his family

Tom Hennessey, father of much loved KCLR commentator, Brendan, has been around soccer all his life. There’s nothing he hasn’t done, from playing to coaching to administration and even refereeing. In 1956, he and his brother along with some friends set up a club called Hearts and they played in Kilkenny. Three years later, he set up Barrow Rovers who went on to have great success throughout the next 20 years. Upon his retirement, Hennessey went into coaching and he became manager of the club and brought great success to the club. He was also instrumental in finding them a pitch to play on. Throughout his time in Rovers, he got into refereeing and was well respected. Affiliated to the Kilkenny League, he had the honour of refereeing inter county games, FAI Junior Cup, LFA Junior Cup, AUL, Counties League and Leinster Junior League matches. After he retired from refereeing, he founded St. Pat’s Boys Schoolboys club in 1975. They started playing in Pacelli Avenue but they were forced to relocate, Hennessey then found them a new venue and they moved to Roselands. His hard work continued as they moved to a parish school field on the Portlaoise Road with numbers increasing and no permanent home. He didn’t relent and helped secure a permanent home at the Meadows and was the driving force behind the recent FIFA approved 4G Full size pitch. He also introduced an adult team and a women’s team to the club too. It’s fair to say that St. Pat’s Boys would not be the club it is today without the hard work and determination of Tom Hennessey, who is currently President of the club. 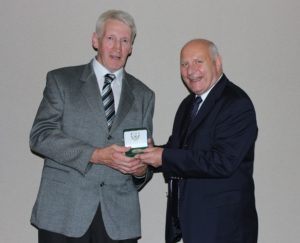 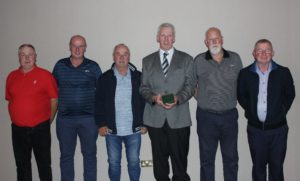 Gabriel Deering with memebers of the Slaney Rovers club

Gabriel Deering is a legend at Slaney Rovers to say the least. After playing rugby with Carlow, he signed for Slaney and had a great career, playing over 184 games for the B team, winning three Division 3 league medals as well as making 59 A team appearances, scoring 14 goals. He moved on to become club PRO in 1987 before taking on the club Treasurer role in 1988. Deering is a man for the history of the club, he has every stat recorded and know just about everything about the club. He can often be seen marking up the pitch and putting up the goals and looks after the weekly lotto in the club. Deering also helped secure land for the club. He was instrumental in helping to develop a new sand based pitch and an all weather training area. His dedication to the club is like no other and he received a Service to Football Award from the Carlow League in 2017.